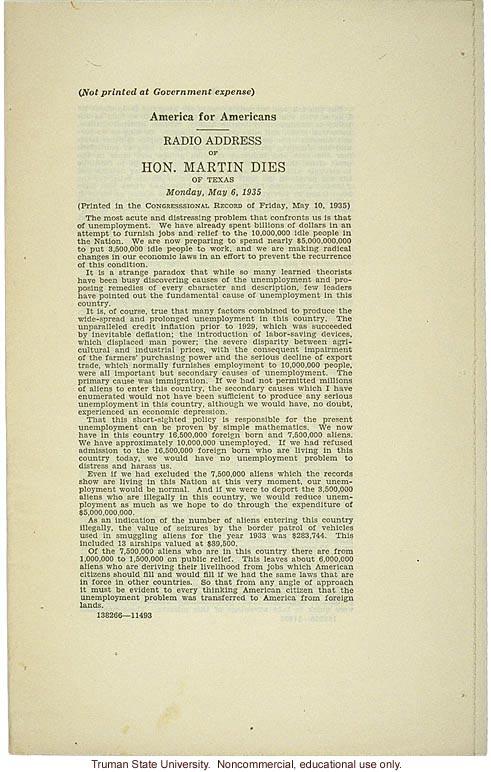 (Not printed at Government expense) America for Americans Radio Address of Hon. Martin Dies of Texas Monday, May 6, 1935. (Printed in the Congressional Record of Friday, May 10, 1935) The most acute and distressing problem that confronts is that of unemployment. We have already spent billions of dollars in an attempt to furnish jobs and relief to the 10,000,000 idle people in the Nation. We are now preparing to spend nearly $5,000,000,000 to put 3,500,000 people to work, and we are making radical changes in our economic laws in an effort to prevent a recurrence of this condition. It is a strange paradox that while so many learned theorists have been busy discovering causes of the unemployment and proposing remedies of every character and description, few leaders have pointed out the fundamental cause of unemployment in this country. It is, of course, true that many factors combined to produce the wide-spread and prolonged unemployment in this country. The unparalleled credit inflation prior to 1929, which was succeeded by inevitable deflation; the introduction of labor-saving devices, which displaced man power; the severe disparity between agricultural and industrial prices, with the consequent impairment of the farmers' purchasing power and the serious decline of export trade, which normally furnishes employment to 10,000,000 people, were all important but secondary causes of unemployment. The primary cause was immigration. If we had not permitted millions of aliens to enter this country, the secondary causes which I have enumerated would not have been sufficient to produce any serious unemployment in this country, although we would have, no doubt, experienced an economic depression. That this short-sighted policy is responsible for the present unemployment can be proven by simple mathematics. We now have in this country 16,500,000 foreign born and 7,500,000 aliens. We have approximately 10,000,000 unemployed. If we had refused admission to the 16,500,000 foreign born who are living in this country today, we would have no unemployment problem to distress and harass us. Even if we had excluded the 7,500,000 aliens which the records show are living in this Nation at this very moment, our unemployment would be normal. And if we were to deport the 3,500,000 aliens who are illegally in this country, we would reduce unemployment as much as we hope to do through the expenditure of $5,000,000,000. As an indication of the number of aliens entering this country illegally, the value of seizures by the border patrol of vehicles used in smuggling aliens for the year 1933 was $283,744. This included 13 airships valued at $89,500. Of the 7,500,000 aliens who are in this country there are from 1,000,000 to 1,500,000 on public relief. This leaves about 6,000,000 aliens who are deriving their livelihood from jobs which American citizens should fill and would fill if we had the same laws that are in force in other countries. So that from any angle of approach it must be evident to every thinking American citizen that the unemployment problem was transferred to America from foreign lands. 138266-11493
Copyright 1999-2004: Cold Spring Harbor Laboratory; American Philosophical Society; Truman State University; Rockefeller Archive Center/Rockefeller University; University of Albany, State University of New York; National Park Service, Statue of Liberty National Monument; University College, London; International Center of Photography; Archiv zur Geschichte der Max-Planck-Gesellschaft, Berlin-Dahlem; and Special Collections, University of Tennessee, Knoxville.
The images and text in this Archive are solely for educational and scholarly uses. The materials may be used in digital or print form in reports, research, and other projects that are not offered for sale. Materials in this archive may not be used in digital or print form by organizations or commercial concerns, except with express permission.