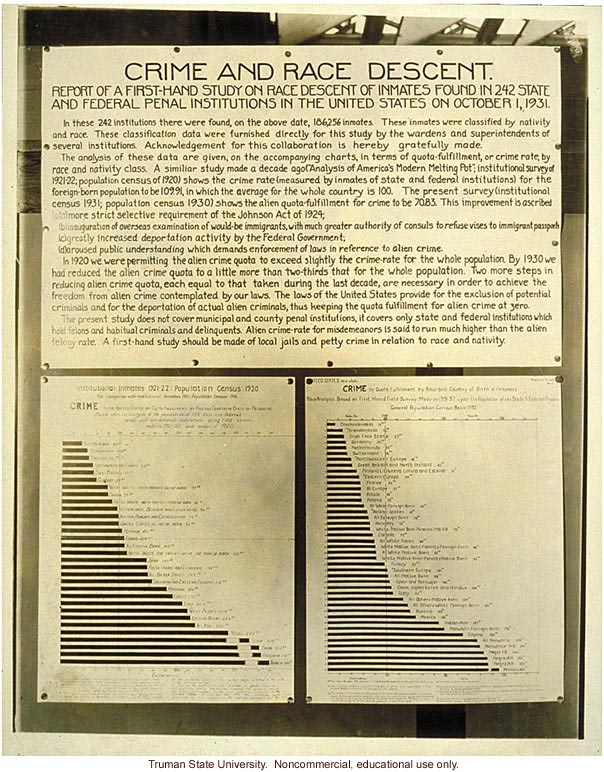 Crime and Race Descent Report of a First-Hand Study on Race Descent of Inmates Found in 242 State and Federal Penal Institutions in the United States on October 1, 1931. In these 242 institutions there were found, on the above date, 186,256 inmates. These inmates were classified by nativity and race. These classification data were furnished directly for this study by the wardens and superintendents of several institutions. Acknowledgement for this collaboration is hereby gratefully made. The analysis of these data are given, on the accompanying charts, in terms of quota-fulfillment, or crime rate, by race and nativity class. A similar study made a decade ago ("Analysis of America's Melting Pot"; institutional survey of 1921-22; population census of 1920) shows the crime rate (measured by inmates of state and federal institutions) for the foreign-born population to be 109.91, in which the average for the whole country is 100. The present survey (institutional census 1931; population census 1930) shows the alien-quota fulfillment for crime to be 70.83. This improvement is ascribed to (a) more strict selective requirement of the Johnson Act of 1924; (b) inauguration of overseas examination of would-be immigrants, with much greater authority of consults to refuse visas to immigrant passports; (c) greatly increased deportation activity by the Federal Government; (d) aroused public understanding which demands enforcement of laws in reference to alien crime. In 1920 we were permitting alien crime quota to exceed slightly the crime rate for the whole population. By 1930 we had reduced the alien crime quota to a little more than two-thirds that for the whole population. Two more steps in reducing alien crime quota, each equal to that taken during the last decade, are necessary in order to achieve the freedom from alien crime contemplated by our laws. The laws of the United States provide for the exclusion of potential criminals and for the deportation of actual alien criminals, thus keeping the quota fulfillment for alien crime at zero. The present study does not cover municipal and county penal institutions, it covers only state and federal institutions which hold felons and habitual criminals and delinquents. Alien crime rate for misdemeanors is said to run much higher than the alien felony rate. A first-hand study should be made of local jails and petty crime in relation to race and nativity. [graph material]
Copyright 1999-2004: Cold Spring Harbor Laboratory; American Philosophical Society; Truman State University; Rockefeller Archive Center/Rockefeller University; University of Albany, State University of New York; National Park Service, Statue of Liberty National Monument; University College, London; International Center of Photography; Archiv zur Geschichte der Max-Planck-Gesellschaft, Berlin-Dahlem; and Special Collections, University of Tennessee, Knoxville.
The images and text in this Archive are solely for educational and scholarly uses. The materials may be used in digital or print form in reports, research, and other projects that are not offered for sale. Materials in this archive may not be used in digital or print form by organizations or commercial concerns, except with express permission.