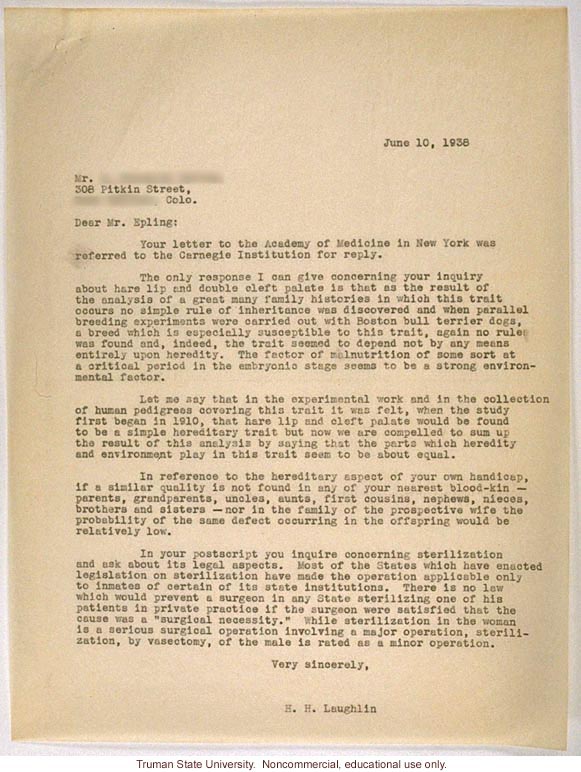 June 10, 1938 Mr. [obscured] 308 Pitkin Street [obscured] Colo. Dear Mr. Epling, Your letter to the Academy of Medicine in New York was referred to the Carnegie Institution for reply. The only response I can give concerning your inquiry about hare lip and cleft palate is that as the result of the analysis of a great many family histories in which this trait occurs no simple rule of inheritance was discovered and when parallel breeding experiments were carried out with Boston bull terrier dogs, a breed which was especially susceptible to this trait, again no rules was found and, indeed, the trait seemed to depend not by any means entirely upon heredity. The factor of malnutrition of some sort at a critical period in the embryonic stage seems to be a strong environmental factor. Let me say that in the experimental work and in the collection of human pedigrees covering this trait it was felt, when the study first began in 1910, that hare lip and cleft palate would be found to be a simple hereditary trait but now we are compelled to sum up the result of this analysis by saying that the parts which heredity and environment play in this trait seem to be about equal. In reference to the hereditary aspect of your own handicap, if a similar quality is not found in any of your nearest blood-kin - parents, grandparents, uncles, aunts, first cousins, nephews, nieces, brothers and sisters - nor in the family of the prospective wife the probability of the same defect occurring in the offspring would be relatively low. In your postscript you inquire concerning sterilization and ask about its legal aspects. Most of the United States which have enacted legislation on sterilization have made the operation applicable only to inmates of certain of its state institutions. There is no law which would prevent a surgeon in any State sterilizing one of his patients in private practice if the surgeon were satisfied that the cause was a "surgical necessity." While sterilization in the woman is a serious surgical operation involving a major operation, sterilization, by vasectomy, of the male is rated as a minor operation. Very sincerely, H.H. Laughlin
Copyright 1999-2004: Cold Spring Harbor Laboratory; American Philosophical Society; Truman State University; Rockefeller Archive Center/Rockefeller University; University of Albany, State University of New York; National Park Service, Statue of Liberty National Monument; University College, London; International Center of Photography; Archiv zur Geschichte der Max-Planck-Gesellschaft, Berlin-Dahlem; and Special Collections, University of Tennessee, Knoxville.
The images and text in this Archive are solely for educational and scholarly uses. The materials may be used in digital or print form in reports, research, and other projects that are not offered for sale. Materials in this archive may not be used in digital or print form by organizations or commercial concerns, except with express permission.