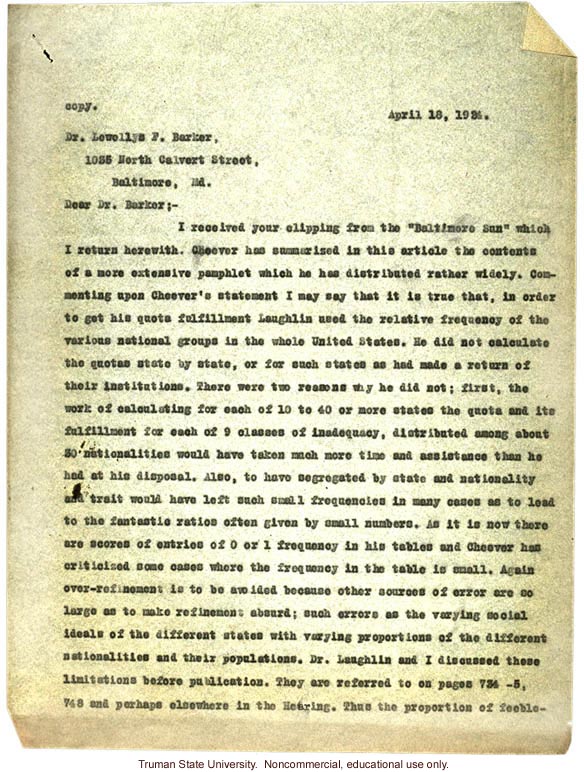 copy. April 18, 1934[?] Dr. Lewellyn P. Barker, 1035 North Calvert Street, Baltimore, Md. Dear Dr. Barker;- I received your clipping from the "Baltimore Sun" which I return herewith. [Cheever] has summarized in this article the contents of a more extensive pamphlet which he has distributed rather widely. Commenting upon Cheever's statement I may say that it is true that, in order to get his quota fulfillment Laughlin used the relative frequency of the various national groups in the whole United States. He did not calculate the quotas state by state, or for such states as had made a return of their institutions. There were two reasons why he did not; first, the work of calculating for each of 10 to 40 more states the quota and its fulfillment for each of 9 classes of inadequacy, distributed among about 30 nationalities would have taken much more time and assistance that he had at his disposal. Also, to have segregated by state and nationality and trait would have left such small frequencies in many cases as to lead to the fantastic ratio often given by small numbers. As it is now there are scores of entries of 0 or 1 frequency in his tables and Cheever has criticized some cases where the frequency in the table is small. Again over-refinement is to be avoided because other sources or error are so large as to make refinement absurd; such errors as the varying social ideals of the different states with varying proportions of the different nationalities and their populations. Dr. Laughlin and I discussed these limitiations before publication. They are referred to on pages 734-5, 748 and perhaps elsewhere in the Hearing. Thus the proportion of feeble-
Copyright 1999-2004: Cold Spring Harbor Laboratory; American Philosophical Society; Truman State University; Rockefeller Archive Center/Rockefeller University; University of Albany, State University of New York; National Park Service, Statue of Liberty National Monument; University College, London; International Center of Photography; Archiv zur Geschichte der Max-Planck-Gesellschaft, Berlin-Dahlem; and Special Collections, University of Tennessee, Knoxville.
The images and text in this Archive are solely for educational and scholarly uses. The materials may be used in digital or print form in reports, research, and other projects that are not offered for sale. Materials in this archive may not be used in digital or print form by organizations or commercial concerns, except with express permission.