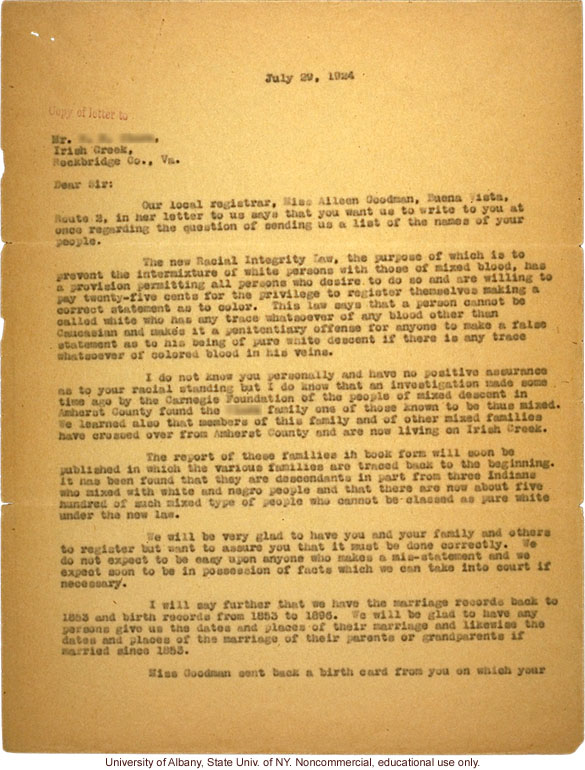 July 29, 1924 [stamped]Copy of letter to[end stamp] Mr. [obscured] Irish Creek Rockbridge Co., Va. Dear Sir: Our local registrar, Miss Aileen Goodman, Buena Vista, Route 2, in her letter to us says that you want us to write to you at once regarding the question of sending us a list of the names of your people. The new racial integrity law, the purpose of which is to prevent the intermixture of white persons with those of mixed blood, has a provision permitting all persons who desire to do so and are willing to pay twenty-five cents for the privilege to register themselves making a correct statement as to color. This law says that a person cannot be called white who has any trace whatsoever of any blood other than Caucasian and makes it a penitentiary offense for anyone to make a false statement as to his being of pure white descent if there is any trace whatsoever of colored blood in his veins. I do not know you personally and have no positive assurance as to your racial standing but I do know that an investigation made some time ago by the Carnegie Foundation of the people of mixed descent in Amherst County found the [obscured] family one of those known to be mixed. We learned also that members of this family and of other mixed families have crossed over from Amherst County and are now living on Irish Creek. The report of those families in book form will soon be published in which the various families are traced back to the beginning. It has been found that they are descendants in part from three Indians who mixed with white and negro people and that there are now about five hundred of such mixed type of people who cannot be classed as pure white under the new law. We will be very glad to have you and your family and others to register but want to assure you that it must be done correctly. We do not expect to be easy upon anyone who makes a mis-statement and we expect soon to be in possession of facts which we can take into court if necessary. I will say further that we have the marriage records back to 1853 and birth records from 1853 to 1895. We will be glad to have any persons give us the dates and places of their marriage and likewise the dates and places of the marriage of their parents or grandparents if married since 1853. Miss Goodman sent back a birth card from you on which your [end]
Copyright 1999-2004: Cold Spring Harbor Laboratory; American Philosophical Society; Truman State University; Rockefeller Archive Center/Rockefeller University; University of Albany, State University of New York; National Park Service, Statue of Liberty National Monument; University College, London; International Center of Photography; Archiv zur Geschichte der Max-Planck-Gesellschaft, Berlin-Dahlem; and Special Collections, University of Tennessee, Knoxville.
The images and text in this Archive are solely for educational and scholarly uses. The materials may be used in digital or print form in reports, research, and other projects that are not offered for sale. Materials in this archive may not be used in digital or print form by organizations or commercial concerns, except with express permission.