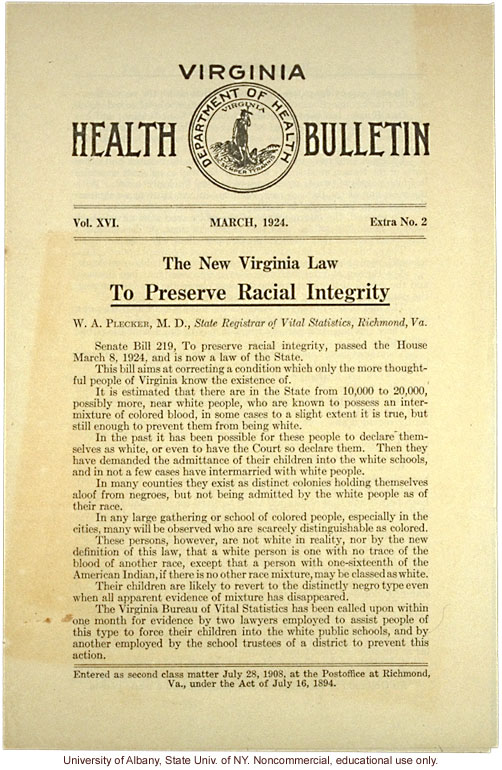 Virginia Health Bulletin[stamp/seal] Vol. XVI. MARCH, 1924. Extra No. 2 The New Virginia Law To Preserve Racial Integrity W.A. Plecker, M.D., State Registrar of Vital Statistics, Richmond, Va. Senate Bill 219, To preserve racial integrity, passed the House March 8, 1924, and is now a law of the State. This bill aims at correcting a condition which only the more thoughtful people of Virginia know the existence of. It is estimated that there are in the State from 10,000 to 20,000, possibly more, near white people, who are known to possess an intermixture of colored blood, in some cases to a slight extent it is true, but still enough to prevent them from being white. In the past it has been possible for these people to declare themselves white, or even to have the Court so declare them. Then they have demanded the admittance of their children into the white schools, and in not a few cases have intermarried with white people. In many countries they exist as distinct colonies holding themselves aloof from negroes, but not being admitted by the white people as one of their race. In any large gathering or school of colored people, especially in the cities, many will be observed who are scarcely distinguishable as colored. These persons, however, are not white in reality, nor by the new definition of this law, that a white person is a person with no trace of the blood of another race, except that a person with one-sixteenth of the American Indian, if there is no other race mixture, may be classed as white. Their children are likely to revert to the distinctly negro type even when all apparent evidence of mixture haws disappeared. The Virginia Bureau of Vital Statistics has been called upon within one month for evidence by two lawyers employed to assist people of this type to force their children into the white public schools, and by another employed by the school trustees of a district to prevent this action. [score] Entered as second class matter July 28, 1908, at the Postoffice at Richmond, Va., under the Act of July 16, 1894. [end]
Copyright 1999-2004: Cold Spring Harbor Laboratory; American Philosophical Society; Truman State University; Rockefeller Archive Center/Rockefeller University; University of Albany, State University of New York; National Park Service, Statue of Liberty National Monument; University College, London; International Center of Photography; Archiv zur Geschichte der Max-Planck-Gesellschaft, Berlin-Dahlem; and Special Collections, University of Tennessee, Knoxville.
The images and text in this Archive are solely for educational and scholarly uses. The materials may be used in digital or print form in reports, research, and other projects that are not offered for sale. Materials in this archive may not be used in digital or print form by organizations or commercial concerns, except with express permission.