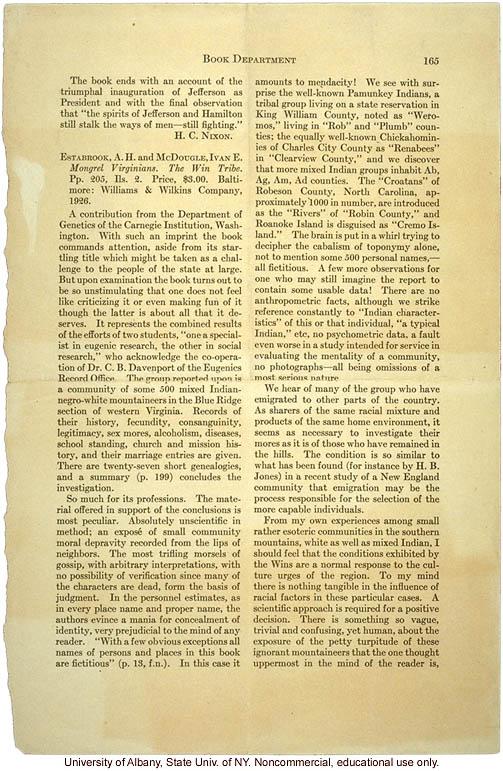 Book Department 165 The book ends with the triumphal inauguration of Jefferson as President and with the final observation that "the spirits of Jefferson and Hamilton still stalk the ways of men - still fighting." Estabrook, Arthur H. and McDougle, Ivan E. Mongrel Virginians. The Win Tribe. Pp. 205, Ils. 2, Price, $3.00. Baltimore: Williams &Wilkins Company, 1926. A contribution from the Department of Genetics of the Carnegie Institution of Washington. With such an imprint the book commands attention, aside from its startling title which might be taken as a challenge to the people of the state at large. But upon examination the book turns out to be so unstimulating that one does not feel like criticizing it or even making fun of it though the latter is about all that it deserves. It represents the combined efforts of two students, "one a specialist in eugenic research, the other in social research," who acknowledge the co-operation of Dr. C. B. Davenport of the Eugenics Record Office. The group reported upon is a community of some 500 mixed Indian-negro-white mountaineers in the Blue Ridge section of western Virginia. Records of their history, fecundity, consanguinity, legitimacy, sex mores, alcoholism, diseases, school standing, church and mission history, and their marriage entries are given. There are twenty-seven short genealogies, and a summary (p.199) concludes the investigation. So much for its professions. The material offered in support of the conclusions is most peculiar. Absolutely unscientific in method; an expose of small community moral depravity recorded from the lips of neighbors. The most trifling morsels of gossip, with arbitrary interpretations, with no possibility of verification since many of the characters are dead, form the basis of judgement. In the personnel estimates, as in every place name and proper name, the authors evince a mania for concealment of identity, very prejudicial to the mind of any reader. "With a few obvious exceptions all names of persons and places in this book are fictitious" (P 13, f.n.). In this case it amounts to mendacity! We see with surprise the well-known Pamunkey Indians, a tribal group living on a state reservation in King William County, noted as "Weremos," living in "Rob" and "Plumb" counties; the equally well-known Chickahominies of Charles City County as "Renabees" in "Clearview County," and we discover that more mixed Indian groups inhabit Ab, Ag, Am, Ad counties. The "Croatans" of Robeson County, North Carolina, approximately 1000 in number, are introduced as the "Rivers" of "Robin County," and Roanoke Island is disguised as "Cremo Island." The brain is put into a whirl trying to decipher the cabalism of toponymy alone, not to mention some 500 personal names, -- all fictitious. A few more observations for one who may still imagine the report to contain some useful data! There are no anthropometric facts, although we strike reference constantly to "Indian characteristics" of this or that individual, "a typical Indian," etc., no psychometric data, a fault even worse in a study intended for service in evaluating the mentality of a community, no photographs - all being omissions of a most serious nature. We hear of many types of the group who have emigrated to other parts of the country. As sharers of the same racial mixture and products of the same home environment, it seems as necessary to investigate their mores as it is of those who have remained in the hills. The condition is so similar to what has been found (for instance by H.B. Jones) in a recent study of a New England community that emigration may be the process responsible for the selection of the more capable individuals. From my own experiences among small rather esoteric communities in the southern mountains, white as well as mixed Indian, I should feel that the conditions exhibited by the Wins are a normal response to the culture urges of the region. To my mind there is nothing tangible in the influence of racial factors in these particular cases. A scientific approach is required for a positive decision. There is something so vague, trivial and confusing, yet human, about the exposure of petty turpitude of these ignorant mountaineers that the one thought uppermost in the mind of the reader is, [end]
Copyright 1999-2004: Cold Spring Harbor Laboratory; American Philosophical Society; Truman State University; Rockefeller Archive Center/Rockefeller University; University of Albany, State University of New York; National Park Service, Statue of Liberty National Monument; University College, London; International Center of Photography; Archiv zur Geschichte der Max-Planck-Gesellschaft, Berlin-Dahlem; and Special Collections, University of Tennessee, Knoxville.
The images and text in this Archive are solely for educational and scholarly uses. The materials may be used in digital or print form in reports, research, and other projects that are not offered for sale. Materials in this archive may not be used in digital or print form by organizations or commercial concerns, except with express permission.