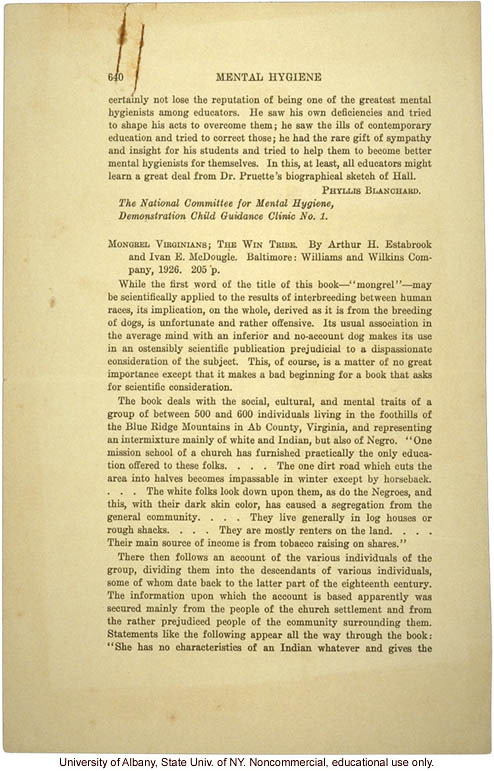 640 Mental Hygiene certainly not lose the reputation of being one of the greatest mental hygienists among educators. He saw his own deficiencies and tried to shape his acts to overcome them; he saw the ills of contemporary education and tried to correct those; he had the rare gift of sympathy and insight for his students and tried to help them to become better mental hygienists for themselves. In this, at least, all educators might learn a great deal from Dr. Pruette's biographical sketch of Hall. Phyllis Blanchard. The National Committee for Mental Hygiene, Demonstration Child Guidance Clinic No. 1. Mongrel Virginians; The Win Tribe. By Arthur H. Estabrook and Ivan E. McDougle. Baltimore: Williams & Wilkins Company, 1926. 205 p. While the first word of the title of this book -"mongrel" - may be scientifically applied to the results of interbreeding between human races, its implication, on the whole, derived as it is from the breeding of dogs, is unfortunate and rather offensive. Its usual association in the average mind with an inferior and no-account dog makes its use in an ostensibly scientific publication prejudicial to a dispassionate consideration of the subject. This, of course, is a matter of no great importance except that it makes a bad beginning for a book that asks for scientific consideration. The book deals with the social, cultural, and mental traits of a group of between 500 and 600 individuals living in the foothill of the Blue Ridge Mountains in Ab County, Virginia, and representing an intermixture mainly of white and Indian, but also of Negro. "One mission school of a church has furnished practically the only education offered to these folks...The one dirt road which cuts the area into halves becomes impassable in winter except by horseback....The white folks look down upon them, as do the Negroes, and this, with their dark skin color, has caused a segregation from the general community ...They live generally in log houses or rough shacks...They are mostly renters on the land...Their main source of income is from tobacco raising on shares." There then follows an account of the various individuals of the group, dividing them into the descendants of various individuals, some of whom date back to the latter part of the eighteenth century. The information upon which the account is based apparently was secured mainly from the people of the church settlement and from the rather prejudiced people of the community surrounding them. Statements like the following appear all the way through the book: "She has no characteristics of an Indian whatever and gives the [end]
Copyright 1999-2004: Cold Spring Harbor Laboratory; American Philosophical Society; Truman State University; Rockefeller Archive Center/Rockefeller University; University of Albany, State University of New York; National Park Service, Statue of Liberty National Monument; University College, London; International Center of Photography; Archiv zur Geschichte der Max-Planck-Gesellschaft, Berlin-Dahlem; and Special Collections, University of Tennessee, Knoxville.
The images and text in this Archive are solely for educational and scholarly uses. The materials may be used in digital or print form in reports, research, and other projects that are not offered for sale. Materials in this archive may not be used in digital or print form by organizations or commercial concerns, except with express permission.