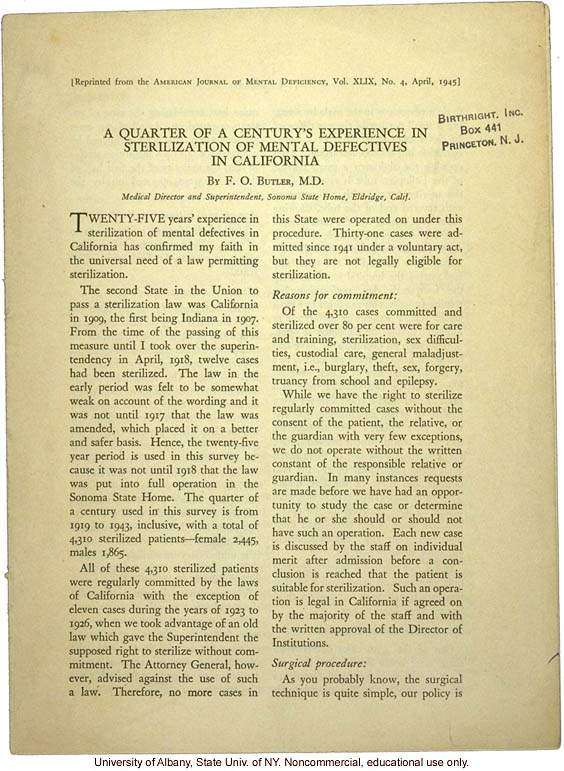 [Reprinted from the American Journal of Mental Deficiency, Vol. XLIX, No. 4, April, 1945] A Quarter of a Century's Experience in Sterilization of Mental Defectives in California By F. O. Butler, M.D. Medical Director and Superintendent, Sonoma State Home, Eldridge, Calif. Twenty-five years' experience in sterilization of mental defectives in California has confirmed my faith in the universal need of a law permitting sterilization. The second State in the Union to pass a sterilization law was California in 1909, the first being Indiana in 1907. From the time of the passing of this measure I took over the superintendency in April, 1918, twelve cases had been sterilized. The law in the early period was felt to be somewhat weak on account of the wording and it was not until 1917 that the law was amended, which placed it on a better and sager basis. Hence, the twenty-five year period is used in this survey because it was not until 1918 that the law was put into full operation in the Sonoma State Home. The quarter of a century used in this survey is from 1919 to 1943, inclusive, with a total of 4,310 sterilized patients - female 2,445, males 1,865. All of these 4,310 sterilized patients were regularly committed by the laws of California with the exception of eleven cases during the years of 1923 to 1926, when we took advantage of an old law which gave the Superintendent the supposed right to sterilize without commitment. The Attorney General, however, advised against the use of such a law. Therefore, no more cases in this State were operated on under this procedure. Thirty-one cases were admitted since 1941 under a voluntary act, but they are not legally eligible for sterilization. Reasons for commitment: Of the 4,310 cases committed and sterilized over 80 per cent were for care and training, sterilization, sex difficulties, custodial care, general maladjustment, i.e., burglary, theft, sex, forgery, truancy from school and epilepsy. While we have the right to sterilize regularly committed cases without the consent of the patient, the relative, or the guardian with very few exceptions, we do not operate with the written constant of the responsible relative or guardian. In many instances requests are made before we have had an opportunity to study the case or determine that he or she should or should not have such an operation. Each new case is discussed by the staff on individual merit after admission before a conclusion is reached that the patient is suitable for sterilization. Such an operation is legal in California if agreed on by the majority of the staff and with the written approval of the Director of Institutions. Surgical procedure: As you probably know, the surgical technique is quite simple, our policy is [end]
Copyright 1999-2004: Cold Spring Harbor Laboratory; American Philosophical Society; Truman State University; Rockefeller Archive Center/Rockefeller University; University of Albany, State University of New York; National Park Service, Statue of Liberty National Monument; University College, London; International Center of Photography; Archiv zur Geschichte der Max-Planck-Gesellschaft, Berlin-Dahlem; and Special Collections, University of Tennessee, Knoxville.
The images and text in this Archive are solely for educational and scholarly uses. The materials may be used in digital or print form in reports, research, and other projects that are not offered for sale. Materials in this archive may not be used in digital or print form by organizations or commercial concerns, except with express permission.