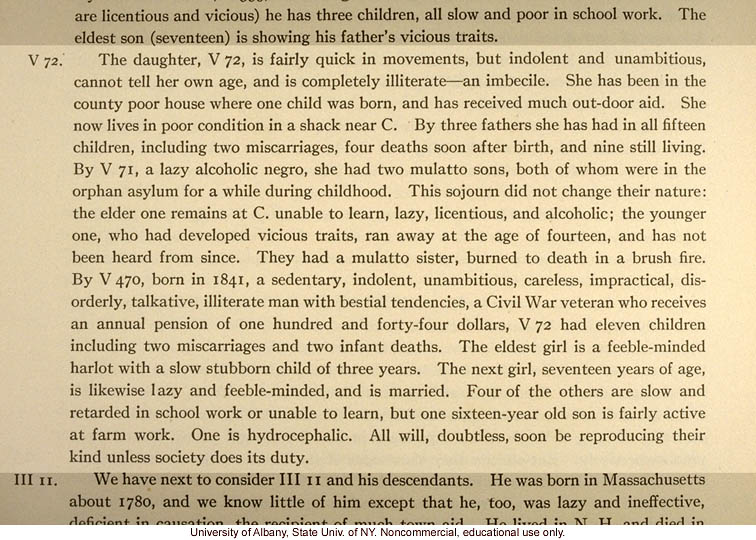 [shadowed]are licentious and vicious) he has three children, all slow and poor in school work. The eldest son (seventeen) is showing his father's vicious traits.[end shadow] V 72. The daughter, V 72, is fairly quick in movements, but indolent and unambitious, cannot tell her own age, and is completely illiterate, -- an imbecile. She has been in the county poor house where one child was born, and has received much out-door aid. She now lives in poor condition in a shack near C. By three fathers she has had in all fifteen children, including two miscarriages, four deaths soon after birth, and nine still living. By V 71, a lazy alcoholic negro, she had two mulatto sons, both of whom were in the orphan asylum for a while during childhood. This sojourn did not change their nature: the elder one remains at C. unable to learn, lazy, licentious, and alcoholic; the hounger one, who had developed vicious traits, ran away at the age of fourteen, and has not been heard from since. They had a mulatto sister, burned to death in a brush fire. By V 470, born in 1841, a sedentary, indolent, unambitious, careless, impractical, disorderly, talkative, illiterate man with bestial tendencies, a Civil War veteran who receives an annual pension of one hundred and forty-four dollars, V 72 had eleven children including two miscarriages and two infant deaths. The eldest girl is a feeble-minded harlot with a slow stubborn child of three years. The next girl, seventeen years of age, is likewise lazy and feeble-minded, and is married. Four of the others are slow and retarded in school work or unable to learn, but one sixteen-year-old son is fairly active at farm work. One is hydrocephalic. All will, doubtless, soon be reproducing their kind unless society does its duty. [shadowed text] III ii. We have next to consider III ii and his descendants. He was born in Massachusetts about 1780, and we know little of him except that he, too, was lazy and ineffective, [end]
Copyright 1999-2004: Cold Spring Harbor Laboratory; American Philosophical Society; Truman State University; Rockefeller Archive Center/Rockefeller University; University of Albany, State University of New York; National Park Service, Statue of Liberty National Monument; University College, London; International Center of Photography; Archiv zur Geschichte der Max-Planck-Gesellschaft, Berlin-Dahlem; and Special Collections, University of Tennessee, Knoxville.
The images and text in this Archive are solely for educational and scholarly uses. The materials may be used in digital or print form in reports, research, and other projects that are not offered for sale. Materials in this archive may not be used in digital or print form by organizations or commercial concerns, except with express permission.