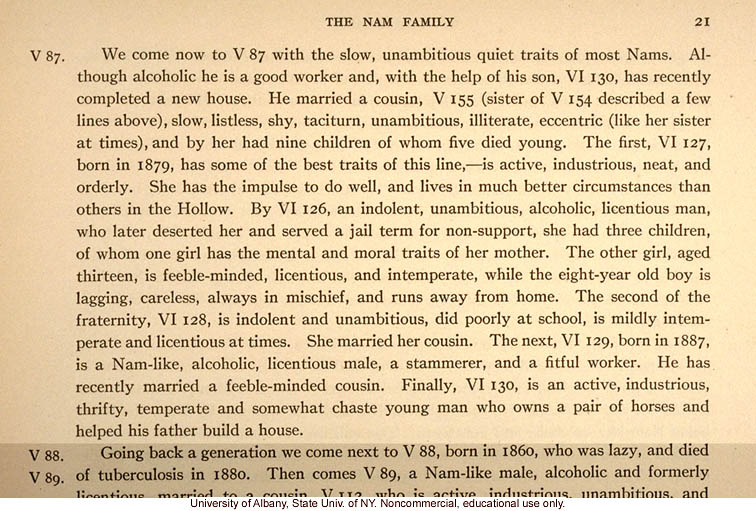 V 87. We come now to V 87 with the slow, unambitious quiet traits of most Nams. Although alcoholic he is a good worker and, with the help of his son, VI 130, has recently completed a new house. He married a cousin, V 155, (sister of V 154 described a few lines above), slow, listless, shy, taciturn, unambitious, illiterate, eccentric (like her sister at times), and by her had nine children of whom five died young. The first, VI 127, born in 1879, has some of the best traits of the line, -- is active, industrious, neat, and orderly. She has the impulse to do well, and lives in much better circumstances than others in the Hollow. By VI 1226, an indolent, unambitious alcoholic, licentious man, who later deserted her and served a jail term for non-support, she had three children, of whom one girl has the mental and moral traits of her mother. The other girl, aged thirteen, is feeble-minded, licentious, and intemperate, while the eight-year-old boy is lagging, careless, always in mischief, and runs away from home. The second of the fraternity, VI 128, is indolent and unambitious, did poorly at school, is mildly intemperate and licentious at times. She married her cousin. The next, VI 129, born in 1887, is a Nam-like, alcoholic, licentious male, a stammerer, and a fitful worker. He has recently married a feeble-minded cousin. Finally, VI 130, is an active, industrious, thrifty, temperate and somewhat chaste young man who owns a pair of horses and helped his father build a house. [shadowed]V88. Going back a generation we come next to V 88, born in 1860, who was lazy, and died of tuberculosis in 1880. Then comes V 89, a Nam-like male, alcoholic and formerly[obscured] [end]
Copyright 1999-2004: Cold Spring Harbor Laboratory; American Philosophical Society; Truman State University; Rockefeller Archive Center/Rockefeller University; University of Albany, State University of New York; National Park Service, Statue of Liberty National Monument; University College, London; International Center of Photography; Archiv zur Geschichte der Max-Planck-Gesellschaft, Berlin-Dahlem; and Special Collections, University of Tennessee, Knoxville.
The images and text in this Archive are solely for educational and scholarly uses. The materials may be used in digital or print form in reports, research, and other projects that are not offered for sale. Materials in this archive may not be used in digital or print form by organizations or commercial concerns, except with express permission.