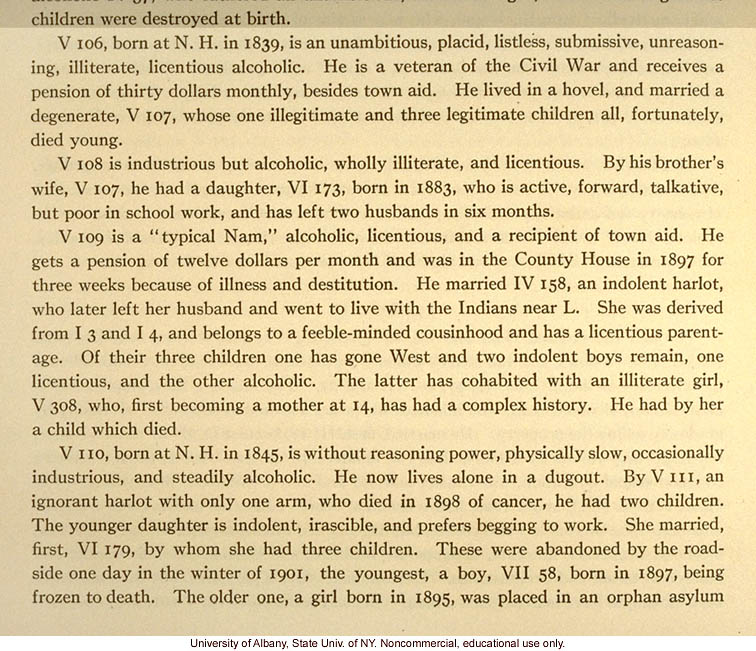 [shadowed]children were destroyed at birth.[end shadow] V 106, born at N.H. in 1839, is an unambitious, placid, listless, submissive, unreasonable, illiterate, licentious alcoholic. He is a veteran of the Civil War and receives a pension of thirty dollars monthly, besides town aid. He lived in a hovel, and married a degenerate, V 107, whose one illegitimate and three illegitimate children all, fortunately, died young. V 108 is industrious but alcoholic, wholly illiterate, and licentious. By his brother's wife, V 107, he had a daughter, VI 173, born in 1883, who is active, forward, talkative, but poor in school work, and has left two husbands in six months. V 109 is a "typical Nam," alcoholic, licentious, and a recipient of town aid. He gets a pension of twelve dollars per month and was in the County House in 1897 for three weeks because of illness and destitution. He married IV 158, an indolent harlot, who later left her husband and went to live with the Indians near L. She was derived from I 3 and I 4, and belongs to a feeble-minded cousinhood and has a licentious parentage. Of their three children one has gone West and two indolent boys remain, one licentious, and the other alcoholic. The latter has cohabitated with an illiterate girl, V 308, who, first becoming a mother at 14, has had a complex history. He had by her a child which died. V 110, born at N.H. in 1845, is without reasoning power, physically slow, occasionally industrious, and steadily alcoholic. He now lives alone in a dugout. By V 111, an ignorant harlot with only one arm, who died in 1898 of cancer, he had two children. The younger daughter is indolent, irascible, and prefers begging to work. She married, first, VI 179, by whom she had three children. These were abandoned by the roadside one day in the winter of 1901, the youngest, a boy, VII 58, born 1897, being frozen to death. The older one, a girl born in 1895, was placed in an orphan asylum [end]
Copyright 1999-2004: Cold Spring Harbor Laboratory; American Philosophical Society; Truman State University; Rockefeller Archive Center/Rockefeller University; University of Albany, State University of New York; National Park Service, Statue of Liberty National Monument; University College, London; International Center of Photography; Archiv zur Geschichte der Max-Planck-Gesellschaft, Berlin-Dahlem; and Special Collections, University of Tennessee, Knoxville.
The images and text in this Archive are solely for educational and scholarly uses. The materials may be used in digital or print form in reports, research, and other projects that are not offered for sale. Materials in this archive may not be used in digital or print form by organizations or commercial concerns, except with express permission.