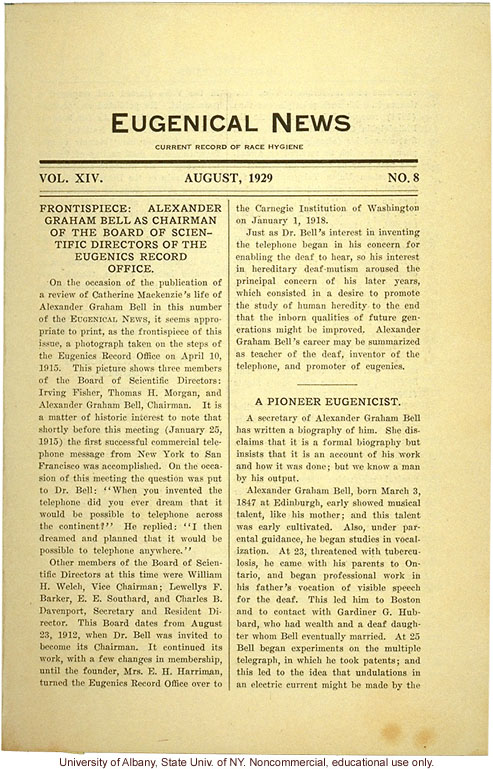 Eugenical News. Current Record of Race Hygiene [score] Vol. XIV. August, 1929 No. 8 [double score] Frontispiece: Alexander Graham Bell as Chairman of the Board of Scientific Directors of the Eugenics Record Office. On the occasion of the publication of a review of Catherine Mackenzie's life of Alexander Graham Bell in this number of the Eugenical News, it seems appropriate to print, as the frontispiece of this issue, a photograph taken on the steps of the Eugenics Record Office on April 10, 1915. This picture shows three members of the Board of Scientific Directors: Irving Fisher, Thomas H. Morgan, and Alexander Graham Bell, Chairman. It is a matter of historic interest to note that shortly before this meeting (January 25, 1915) the first successful commercial telephone message from New York to San Francisco was accomplished. On the occasion of this meeting the question was put to Dr. Bell: "When you invented the telephone did you ever dream that it would be possible to telephone across the continent?" He replied: "I then dreamed and planned that it would be possible to telephone anywhere." Other members of the Board of Scientific Directors at this time were William H. Welch, Vice Chairman; Lewellys F. Barker, E. E. Southard, and Charles B. Davenport, Secretary and Resident Director. This Board dates from August 23, 1912, when Dr. Bell was invited to become its Chairman. It continued its work, with a few changes in membership, until the founder, Mrs. E. H. Harriman, turned the Eugenics Record Office over to the Carnegie Institution of Washington on January 1, 1918. Just as Dr. Bell's interest in inventing the telephone began in his concern for enabling the deaf to hear, so his interest in hereditary deaf-mutism aroused the principal concern of his later years, which consisted in a desire to promote the study of human heredity to the end that the inborn qualities of future generations might be improved. Alexander Graham Bell's career may be summarized as teacher of the deaf, inventor of the telephone, and promoter of eugenics. [centered score] A Pioneer Eugenicist. A secretary of Alexander Graham Bell has written a biography of him. She disclaims that it is a formal biography but insists that it is an account of his work and how it was done; but we know a man by his output. Alexander Graham Bell, born March 3, 1847 at Edinburgh, early showed musical talent, like his mother; and this talent was early cultivated. Also, under parental guidance, he began studies in vocalization. At 23, threatened with tuberculosis, he came home with his parents to Ontario, and began professional work in his father's vocation of visible speech for the deaf. This led him to Boston and to contact with Gardiner G. Hubbard, who had wealth and a deaf daughter whom Bell eventually married. At 25 Bell began experiments on the multiple telegraph, in which he took patents; and this led to the idea that undulations in an electric current might be made by the [end]
Copyright 1999-2004: Cold Spring Harbor Laboratory; American Philosophical Society; Truman State University; Rockefeller Archive Center/Rockefeller University; University of Albany, State University of New York; National Park Service, Statue of Liberty National Monument; University College, London; International Center of Photography; Archiv zur Geschichte der Max-Planck-Gesellschaft, Berlin-Dahlem; and Special Collections, University of Tennessee, Knoxville.
The images and text in this Archive are solely for educational and scholarly uses. The materials may be used in digital or print form in reports, research, and other projects that are not offered for sale. Materials in this archive may not be used in digital or print form by organizations or commercial concerns, except with express permission.