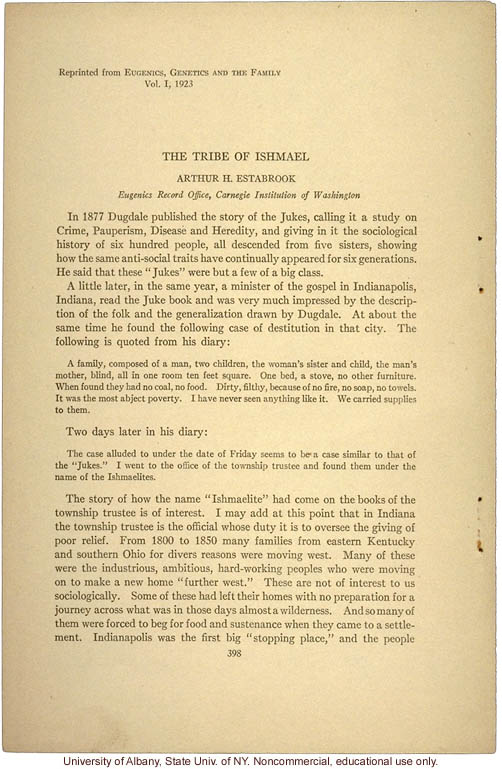 Reprinted from Eugenics, Genetics and the Family Vol. I, 1923 The Tribe of Ishmael Arthur H. Estabrook Eugenics Record Office, Carnegie Institution of Washington In 1877 Dugdale published the story of the Jukes, calling it a study on Crime, Pauperism, Disease and Heredity, and giving in it the sociological history of six hundred people, all descended from five sisters, showing how the same anti-social traits have continually appeared for six generations. He said that these "Jukes" were but a few of a big class. A little later, in the same year, a minister of the gospel in Indianapolis, Indiana, read the Juke book and was very much impressed by the description of the folk and the generalization drawn by Dugdale. At about the same time he found the following case of destitution in that city. The following is quoted from his diary: [extract]A family, composed of a man, two children, the woman's sister and child, the man's mother, blind, all in one room ten feet square. One bed, a stove, no other furniture. When found they had no coal, no food. Dirty, filthy, because of no fire, no soap, no towels. It was the most abject poverty. I have never seen anything like it. We carried supplies to them. [end extract] Two days later in his diary: [extract]The case alluded to under the date of Friday seems to be case similar to that of the "Jukes." I went to the office of the township trustee and found them under the name of the Ishmaelites.[end extract] The story of how the name "Ishmaelite" had come on the books of the township trustee is of interest. I may add at this point that in Indiana the township trustee is the official whose duty it is to oversee the giving of poor relief. From 1800 to 1850 many families from eastern Kentucky and Southern Ohio for divers reasons were moving west. Many of these were the industrious, ambitious, hard-working peoples who were moving on to make a new home "further west." These are not of interest to us sociologically. Some of these had left their homes with no preparation for a journey across what was in those days almost a wilderness. And so many of them were forced to beg for food and sustenance when they came to a settlement. Indianapolis was the first big "stopping place," and the people 398 [end]
Copyright 1999-2004: Cold Spring Harbor Laboratory; American Philosophical Society; Truman State University; Rockefeller Archive Center/Rockefeller University; University of Albany, State University of New York; National Park Service, Statue of Liberty National Monument; University College, London; International Center of Photography; Archiv zur Geschichte der Max-Planck-Gesellschaft, Berlin-Dahlem; and Special Collections, University of Tennessee, Knoxville.
The images and text in this Archive are solely for educational and scholarly uses. The materials may be used in digital or print form in reports, research, and other projects that are not offered for sale. Materials in this archive may not be used in digital or print form by organizations or commercial concerns, except with express permission.