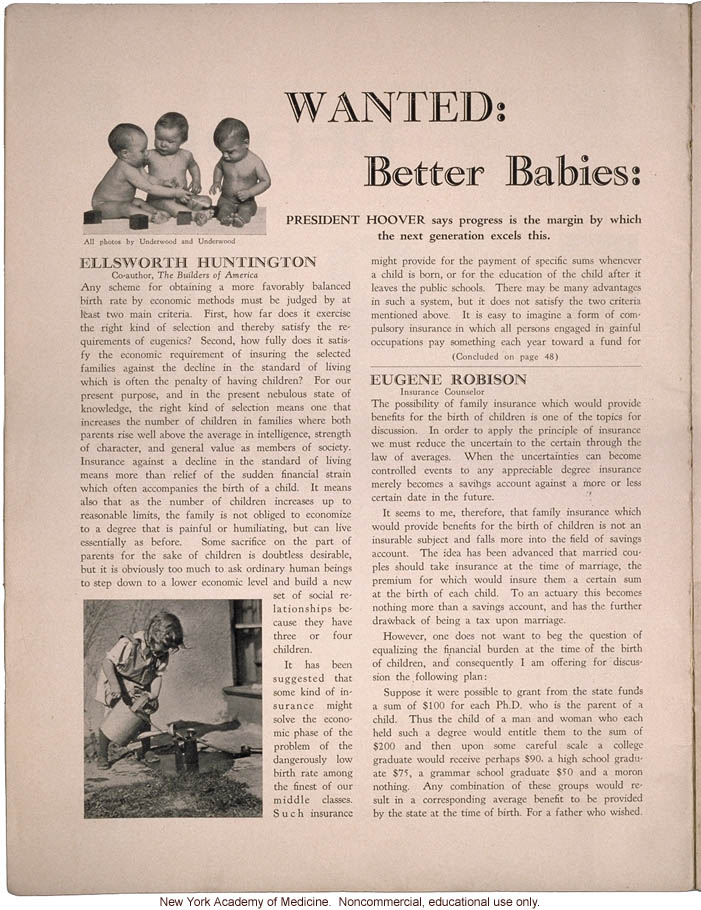 Wanted: Better Babies: President Hoover says progress is the margin by which the next generation excels this. [photograph, group of babies] [caption]All photos by Underwood and Underwood[end caption] Ellsworth Huntington Co-Author, The Builders of America Any scheme for obtaining a more favorably balanced birth rate by economic means must be judged by at least two main criteria. First, how far does it exercise the right kind of selection and thereby satisfy the requirements of eugenics? Second, how fully does it satisfy the economic requirement of insuring the selected families against the decline in the standard of living which is often the penalty of having children? For our present purpose, and in the present nebulous state of knowledge, the right kind of selection means one that increases the number of children in families where both parents rise well above the average in intelligence, strength of character, and general value as members of society. Insurance against a decline in the standard of living means more than relief of the sudden financial strain which often accompanies the birth of a child. It means also that as the number of children increases up to reasonable limits, the family is not obligated to economize to a degree that it is painful or humiliating, but can live essentially as before. Some sacrifice on the part of parents for the sake of the children is doubtless desirable, but it is obviously too much to ask ordinary human beings to step down to a lower economic level and build a new set of social relationships because they have three or four children. It has been suggested that some kind of insurance might solve the economic phase of the problem of the dangerously low birth rate among the finest of our middle classes. Such insurance might provide for the payment of specific sums whenever a child is born, or for the education of the child after it leaves the public schools. There may be many advantages in such a system, but it does not satisfy the two criteria mentioned above. It is easy to imagine a form of compulsory insurance in which all persons engaged in gainful occupations pay something each year toward a fund for (Concluded on page 48) [hairline rule] Eugene Robison Insurance Couselor The possibility of family insurance which would provide benefits for the birth of children is one of the topics for discussion. In order to apply the principle of insurance we must reduce the uncertain to the certain through the law of averages. When the uncertainties can become controlled events to any appreciable degree insurance merely becomes a savings account against a more or less certain date in the future. It seems to me, therefore, that family insurance which would provide benefits for the birth of children is not an insurable subject and falls more into the field of savings account. The idea has been advanced that married couples should take insurance at the time of marriage, the premium for which would insure them a certain sum at the birth of each child. To an actuary this becomes nothing more than a savings account, and has the further drawback of being a tax upon marriage. However, one does not want to beg the question of equalizing the financial burden at the time of the birth of children, and consequently I am offering for discussion the following plan: Suppose it were possible to grant from the state funds a sum of $100 for each Ph.D. who is the parent of a child. Thus the child of a man and woman who each held such a degree would entitle them to the sum of $200 and then upon some careful scale a college graduate would receive perhaps $90, a high school graduate $75, a grammar school graduate $50 and a moron nothing. Any combination of these groups would result in a corresponding average benefit to be provided by the state at the time of birth. For a father who wished. [end]
Copyright 1999-2004: Cold Spring Harbor Laboratory; American Philosophical Society; Truman State University; Rockefeller Archive Center/Rockefeller University; University of Albany, State University of New York; National Park Service, Statue of Liberty National Monument; University College, London; International Center of Photography; Archiv zur Geschichte der Max-Planck-Gesellschaft, Berlin-Dahlem; and Special Collections, University of Tennessee, Knoxville.
The images and text in this Archive are solely for educational and scholarly uses. The materials may be used in digital or print form in reports, research, and other projects that are not offered for sale. Materials in this archive may not be used in digital or print form by organizations or commercial concerns, except with express permission.