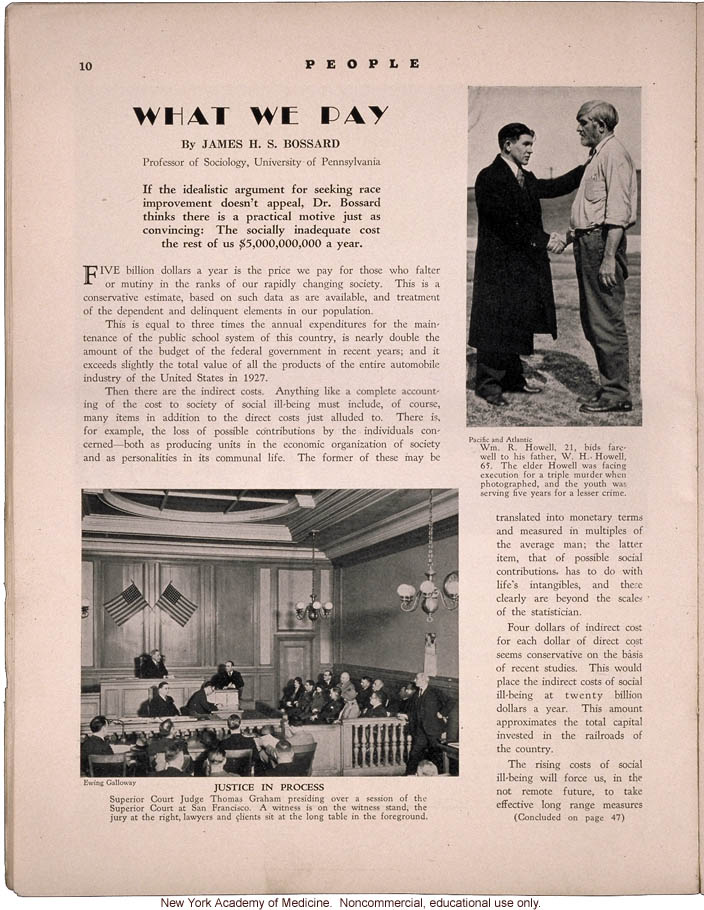 10 PEOPLE What We Pay By James H. S. Bossard Professor of Sociology, University of Pennsylvania If the idealistic argument for seeking race improvement doesn't appeal, Dr. Bossard thinks there is a practical motive just as convincing: The socially inadequate cost the rest of us $5,000,000,000 a year. Five billion dollars a year is the price we pay for those who falter or mutiny in the ranks of our rapidly changing society. This is a conservative estimate, based on such data as are available, and treatment of the dependent and delinquent elements in our population. This is equal to three times the annual expenditures for the maintenance of the public school system of this country, is nearly double the amount of the budget of the federal government in recent years; and it exceeds slightly the total value of all the products of the entire automobile industry of the United States in 1927. Then there are the indirect costs. Anything like a complete accounting of the cost to society of social ill-being must include, of course, many items in addition to the direct costs just alluded to. There is, for example, the loss of possible contributions by the individuals concerned - both as producing units in the economic organization of society and as personalities in its communal life. The former of these may be translated into monetary terms and measured in multiples of the average man; the latter item, that of possible social contributions, has to do with life's intangibles, and these clearly are beyond the scales of the statistician. Four dollars of indirect cost for each dollar of direct cost seems conservative on the basis of recent studies. This would place the indirect costs of social ill-being at twenty billion dollars a year. This amount approximates the total capital invested in the railroads of the country. The rising costs of social ill-being will force us, in the not remote future, to take effective long range measures (Concluded on page 47) [photo] [caption]Ewing Galloway Justice in Process Superior Court Judge Thomas Graham presiding over a session of the Superior Court at San Francisco. A witness is on the witness stand, the jury at the right, lawyers and clients sit at the long table in the foreground. [photo] [caption]Pacific and Atlantic Wm. R. Howell, 21, bids farewell to his father W.H. Howell, 65. The elder Howell was facing execution for a triple murder when photographed, and the youth was serving five years for a lesser crime. [end]
Copyright 1999-2004: Cold Spring Harbor Laboratory; American Philosophical Society; Truman State University; Rockefeller Archive Center/Rockefeller University; University of Albany, State University of New York; National Park Service, Statue of Liberty National Monument; University College, London; International Center of Photography; Archiv zur Geschichte der Max-Planck-Gesellschaft, Berlin-Dahlem; and Special Collections, University of Tennessee, Knoxville.
The images and text in this Archive are solely for educational and scholarly uses. The materials may be used in digital or print form in reports, research, and other projects that are not offered for sale. Materials in this archive may not be used in digital or print form by organizations or commercial concerns, except with express permission.