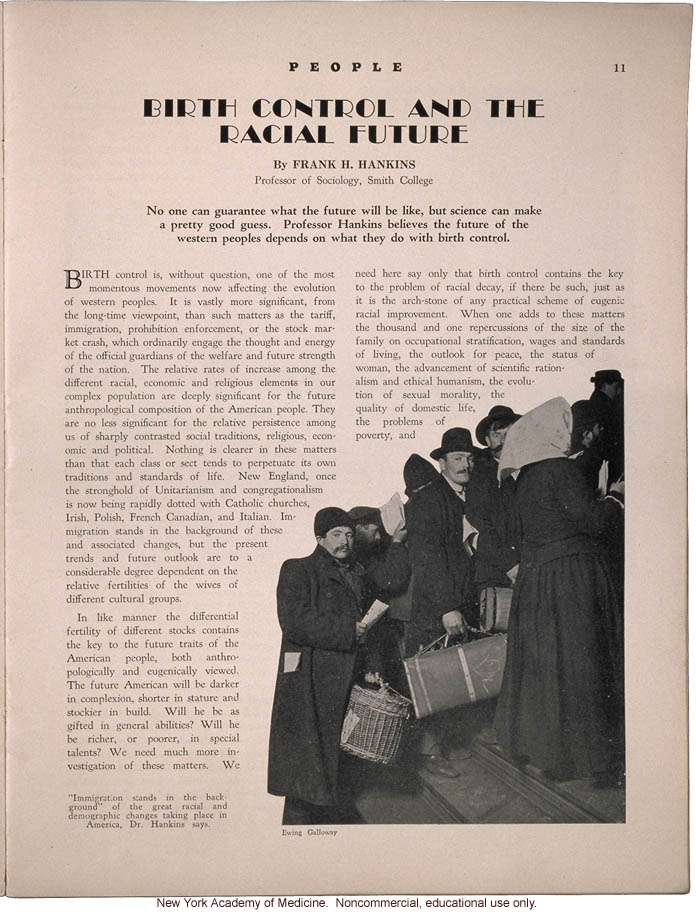 PEOPLE 11 Birth Control and the Racial Future By Frank H. Hankins Professor of Sociology, Smith College No one can guarantee what the future will be like, but science can make a pretty good guess. Professor Hankins believes the future of the western peoples depends on what they do with birth control. Birth control is, without question, one of the most momentous movements now affecting the evolution of western peoples. It is vastly more significant, from the long-time viewpoint, than such matters as the tariff, immigration, prohibition enforcement, or the stock market crash, which ordinarily engage the thought and energy of the official guardians of the welfare and future strength of the nation. The relative rates of increase among the different racial, economic and religious elements in our complex population are deeply significant for the future anthropological composition of the American people. They are no less significant for the relative persistence among us of sharply contrasted social traditions, religious, economic and political. Nothing is clearer in these matters that that each class or sect tends to perpetuate its own traditions and standards of life. New England, once the stronghold of Unitarianism and congregationalism is now being rapidly dotted with Catholic churches, Irish, Polish, French Canadian, and Italian. Immigration stands in the background of these and associated changes, but the present trends and future outlook are to a considerable degree dependent on the relative fertilities of the wives of different cultural groups. In like manner the differential fertility of different stocks contains the key to the future traits of the American people, both anthropologically and eugenically viewed. The future American will be darker in complexion, shorter in stature and stockier in build. Will he be as gifted in general abilities? Will he be richer, or poorer, in special talents? We need much more investigation of these matters. We need here say only that birth control contains the key to the problem of racial decay, if there be such, just as it is the arch-stone of any practical scheme of eugenic racial improvement. When one adds to these matters the thousand and one repercussions of the size of the family on occupational stratification, wages and standards of living, the outlook for peace, the status of woman, and advancement of scientific rationalism and ethical humanism, the evolution of sexual morality, the quality of domestic life, the problems of poverty, and [photo] Ewing Galloway [caption] "Immigration stands in the background" of the great racial and demographic changes taking place in America, Dr. Hankins says.[end caption] [end]
Copyright 1999-2004: Cold Spring Harbor Laboratory; American Philosophical Society; Truman State University; Rockefeller Archive Center/Rockefeller University; University of Albany, State University of New York; National Park Service, Statue of Liberty National Monument; University College, London; International Center of Photography; Archiv zur Geschichte der Max-Planck-Gesellschaft, Berlin-Dahlem; and Special Collections, University of Tennessee, Knoxville.
The images and text in this Archive are solely for educational and scholarly uses. The materials may be used in digital or print form in reports, research, and other projects that are not offered for sale. Materials in this archive may not be used in digital or print form by organizations or commercial concerns, except with express permission.