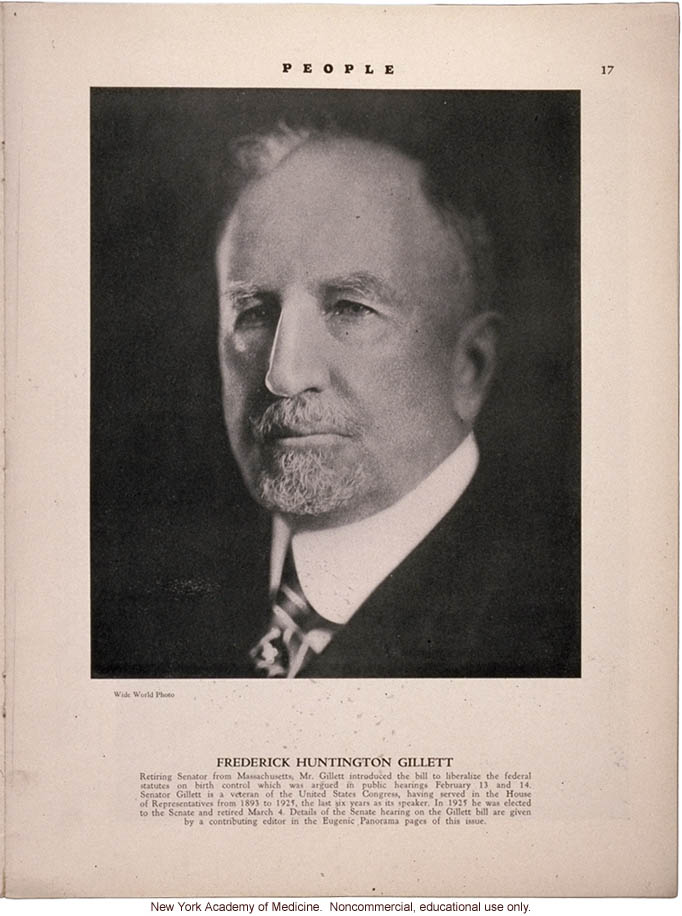 [photo][photo credit]Wide World Photo [photo caption]Frederick Huntington Gillett Retiring Senator from Massachusetts, Mr. Gillett introduced the bill to liberalize the federal statutes on birth control which was argued in public hearings February 13 and 14. Senator Gillett is a veteran of the United States Congress, having served in the House of Representatives from 1893 to 1925, the last six years as its speaker. In 1925 he was elected to the Senate and retired March 4. Details of the Senate hearing on the Gillett bill are given by a contributing editor in the Eugenic Panorama pages of this issue. [end]
Copyright 1999-2004: Cold Spring Harbor Laboratory; American Philosophical Society; Truman State University; Rockefeller Archive Center/Rockefeller University; University of Albany, State University of New York; National Park Service, Statue of Liberty National Monument; University College, London; International Center of Photography; Archiv zur Geschichte der Max-Planck-Gesellschaft, Berlin-Dahlem; and Special Collections, University of Tennessee, Knoxville.
The images and text in this Archive are solely for educational and scholarly uses. The materials may be used in digital or print form in reports, research, and other projects that are not offered for sale. Materials in this archive may not be used in digital or print form by organizations or commercial concerns, except with express permission.