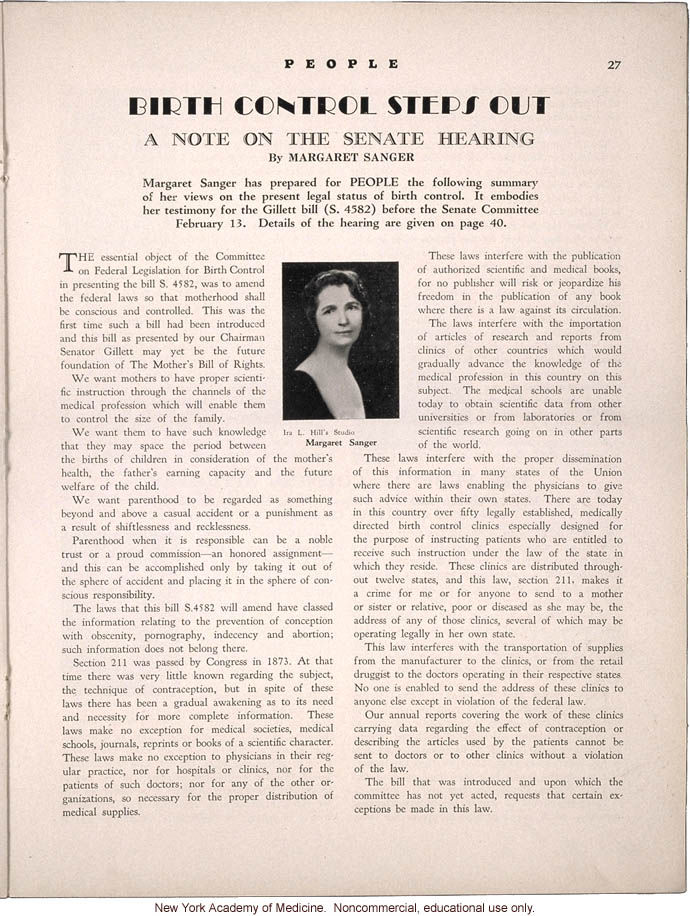 PEOPLE 27 Birth Control Steps Out A Note on the Senate Hearing By Margaret Sanger Margaret Sanger has prepared for PEOPLE the following summary of her views on the present legal status of birth control. It embodies her testimony for the Gillett bill (S. 4582) before the Senate Committee February 13. Details of the hearing are given on page 40. [center photo of Sanger] The essential object of the Committee on Federal Legislation for Birth Control in presenting the bill S. 4582, was to amend the federal laws so that motherhood shall be conscious and controlled. This was the first time such a bill had been introduced and this bill as presented by our Chairman Senator Gillett may yet be the future foundation of The Mother's Bill of Rights. We want mothers to have proper scientific instruction through the channels of the medical profession which will enable them to control the size of the family. We want them to have such knowledge that they may space the period between the births of children in consideration of the mother's health, the father's earning capacity and the future welfare of the child. We want parenthood to be regarded as something beyond and above a casual accident or a punishment as a result of shiftlessness and recklessness. Parenthood when it is responsible can be a noble trust or a proud commission - an honored assignment - and this can be accomplished only by taking it out of the sphere of accident and placing it in the sphere of conscious responsibility. The laws which this bill S. 4582 will amend have classed the information relating to the prevention of conception with obscenity, pornography, indecency and abortion; such information does not belong there. Section 211 was passed by Congress in 1873. At that time there was very little known about the subject, the technique of contraception, but in spite of these laws there has been a gradual awakening as to its need and necessity for more complete information. These laws make no exception for medical societies, medical schools, journals, reprints or books of a scientific character. These laws make no exception to physicians in their regular practice, nor for hospitals or clinics, nor for the patients of such doctors; nor for any other organizations, so necessary for the proper distribution of medical supplies. These laws interfere with the publication of authorized scientific and medical books, for no publisher will risk or jeopardize his freedom in the publication of any book where there is a law against its circulation. The laws interfere with the importation of articles of research and reports from clinics of other countries which would gradually advance the knowledge of the medical profession in this country on this subject. The medical schools are unable today to obtain scientific data from other universities or from laboratories or from scientific research going on in other parts of the world. These laws interfere with the proper dissemination of this information in many states of the Union where there are laws enabling physicians to give such advice within their own states. There are today in this country over fifty legally established, medically directed birth control clinics especially designed for the purpose of instructing patients who are entitled to receive such instruction under the law of the state in which they reside. These clinics are distributed throughout twelve states, and this law, section 211, makes it a crime for me or for anyone to send to a mother or sister or relative, poor or diseased as she may be, the address of any of those clinics, several of which may be operating legally in her own state. This law interferes with the transportation of supplies from the manufacturer to the clinics, or from the retail druggist to the doctors operating in their respective states. No one is enabled to send the address of these clinics to anyone else except in violation of the federal law. Our annual reports covering the work of these clinics carrying data regarding the effect of contraception or describing the articles used by the patients cannot be sent to doctors or to other clinics without a violation of the law. The bill that was introduced and upon which the committee has not yet acted, requests that certain exceptions be made in this law. [end]
Copyright 1999-2004: Cold Spring Harbor Laboratory; American Philosophical Society; Truman State University; Rockefeller Archive Center/Rockefeller University; University of Albany, State University of New York; National Park Service, Statue of Liberty National Monument; University College, London; International Center of Photography; Archiv zur Geschichte der Max-Planck-Gesellschaft, Berlin-Dahlem; and Special Collections, University of Tennessee, Knoxville.
The images and text in this Archive are solely for educational and scholarly uses. The materials may be used in digital or print form in reports, research, and other projects that are not offered for sale. Materials in this archive may not be used in digital or print form by organizations or commercial concerns, except with express permission.