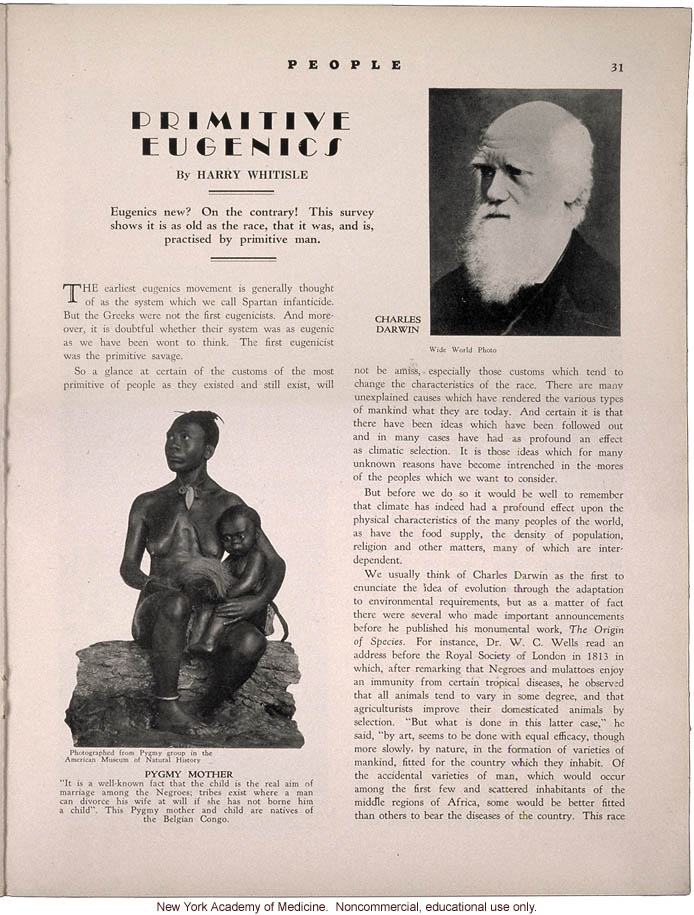 PEOPLE 31 Primitive Eugenics By Harry Whitisle [centered double score] Eugenics new? On the contrary! This survey shows it is as old as the race, that it was, and is, practiced by primitive man. [centered double score] The earliest eugenics movement is generally thought of as the system which we call Spartan infanticide. But the Greeks were not the first eugenicists. And moreover, it is doubtful whether their system was as eugenic as we have been wont to think. The first eugenicist was the primitive savage. So a glance at certain of the customs of the most primitive of people as they existed and still exist, will not be amiss, especially those customs which tend to change the characteristics of the race. There are many unexplained causes which have rendered the various types of mankind what they are today. And certain it is that there have been ideas which have been followed out and in many cases have had as profound an effect as climatic selection. It is those ideas which for many unknown reasons have become intrenched in the mores of the peoples which we want to consider. But before we do it would be well to remember that climate has indeed had a profound effect upon the physical characteristics of the many peoples of the world, as have the food supply, the density of the population, religion and other matters, many of which are interdependent. We usually think of Charles Darwin as the first to enunciate the idea of evolution through the adaptation to environmental requirements, but as a matter of fact there were several who made important announcements before he published his monumental work, [italics]The Origin of Species.[end italics] For instance, Dr. W. C. Wells read an address before the Royal Society of London in 1813 in which, after remarking that Negroes and mulattoes enjoy an immunity from certain tropical diseases, he observed that all animals tend to vary in some degree, and that agriculturists improve their domesticated animals by selection. "But what is done in this latter case," he said, "by art, seems to be done with equal efficacy, though more slowly, by nature, in the formation of varieties of mankind, fitted for the country which they inhabit. Of the accidental varieties of man, which would occur among the first few and scattered inhabitants of the middle regions of Africa, some would be better fitted than others to bear the diseases of the country. This race [photo][photo credit]Photographed from Pygmy group in the American Museum of Natural History [photo caption]PYGMY MOTHER "It is a well-known fact that the child is the real aim of marriage among the Negroes; tribes exist where a man can divorce his wife at will if she has not borne him a child." This pygmy mother and child are natives of the Belgian Congo. [photo]CHARLES DARWIN [photo credit]Wide World Photo [end]
Copyright 1999-2004: Cold Spring Harbor Laboratory; American Philosophical Society; Truman State University; Rockefeller Archive Center/Rockefeller University; University of Albany, State University of New York; National Park Service, Statue of Liberty National Monument; University College, London; International Center of Photography; Archiv zur Geschichte der Max-Planck-Gesellschaft, Berlin-Dahlem; and Special Collections, University of Tennessee, Knoxville.
The images and text in this Archive are solely for educational and scholarly uses. The materials may be used in digital or print form in reports, research, and other projects that are not offered for sale. Materials in this archive may not be used in digital or print form by organizations or commercial concerns, except with express permission.