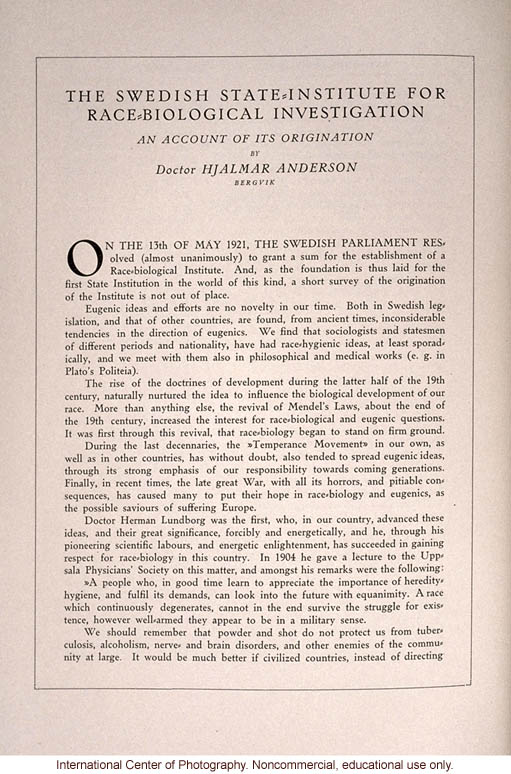 [hairline boxed text] The Swedish State-Institute for Race-Biological Investigation An Account of Its Origination By Doctor Hjalmar Anderson Bergvik On the 13th of May 1921, the Swedish Parliament resolved (almost unanimously) to grant a sum for the establishment of a Race-biological Institute. And, as the foundation is thus laid for the first State Institution in the world of this kind, a short survey of the origination of the Institute is not out of place. Eugenic ideas and efforts are no novelty in our time. Both in Swedish legislation, and that of other countries, are found, from ancient times, inconsiderable tendencies in the direction of eugenics. We find that sociologists and statesmen of different periods and nationality, have had race-hygienic ideas, at least sporadically, and we meet with them also in philosophical and medical works (e.g. in Plato's Politeia). The rise of the doctrines of development during the latter half of the 19th century, naturally nurtured the idea to influence the biological development of our race. More than anything else, the revival of Mendel's Laws, about the end of the 19th century, increased the interest for race-biological and eugenic questions. It was first through this revival, that race-biology began to stand on firm ground. During the last decenneries, the "Temperance Movement" in our own, as well as in other countries, has without doubt, also tended to spread eugenic ideas, through its strong emphasis of our responsibility towards coming generations. Finally, in recent times, the late great War, with all its horrors, and pitiable consequences, has caused many to put their hope in race-biology and eugenics, as the possible saviours of suffering Europe. Doctor Herman Lundborg was the first, who, in our country, advance these ideas, and their great significance, forcibly and energetically, and he, through his pioneering scientific labours, and energetic enlightenment, has succeeded in gaining respect for race-biology in this country. In 1904 he gave a lecture to the Uppsala Physicians' Society on this matter, and amongst his remarks were the following: "A people who, in good time learn to appreciate the importance of heredity-hygiene, and fulfil its demands, can look to the future with equanimity. A race which continuously degenerates, cannot in the end survive the struggle for existence, however well-armed they appear to be in a military sense. We should remember that powder and shot do not protect us from tuberculosis, alcoholism, nerve- and brain disorders, and other enemies of the community at large. It would be much better if civilized countries, instead of directing [end]
Copyright 1999-2004: Cold Spring Harbor Laboratory; American Philosophical Society; Truman State University; Rockefeller Archive Center/Rockefeller University; University of Albany, State University of New York; National Park Service, Statue of Liberty National Monument; University College, London; International Center of Photography; Archiv zur Geschichte der Max-Planck-Gesellschaft, Berlin-Dahlem; and Special Collections, University of Tennessee, Knoxville.
The images and text in this Archive are solely for educational and scholarly uses. The materials may be used in digital or print form in reports, research, and other projects that are not offered for sale. Materials in this archive may not be used in digital or print form by organizations or commercial concerns, except with express permission.