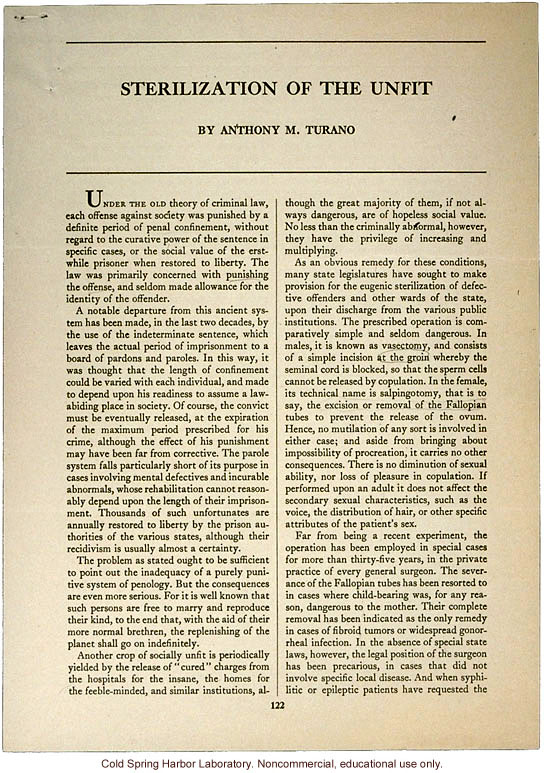 [hairline score] Sterilization of the Unfit By Anthony M. Turano [hairline score] Under the old theory of criminal law, each offense against society was punished by a definite period of penal confinement, without regard to the curative power of the sentence in specific cases, or the social value of the erstwhile prisoner when restored to liberty. The law was primarily concerned with punishing the offense, and seldom made allowance for the identity of the offender. A notable departure from this ancient system has been made, in the last two decades, by the use of the indeterminate sentence, which leaves the actual period of imprisonment to a board of pardons and paroles. In this way, it was thought that the length of confinement could be varied with each individual, and made to depend upon his readiness to assume a lawabiding place in society. Of course, the convict must eventually be released, at the expiration of the maximum period prescribed for his crime, although the effect of his punishment may have been far from corrective. The parole system falls particularly short of its purpose in cases involving mental defectives and incurable abnormals, whose rehabilitation cannot reasonable depend upon the length of their imprisonment. Thousands of such unfortunates are annually restored to liberty by the prison authorities of the various states, although their recidivism is usually almost a certainty. The problem as stated ought to be sufficient to point out the inadequacy of a purely punitive system of penology. But the consequences are even more serious. For it is well known that such persons are free to marry and reproduce their kind, to the end that, with the aid of their more normal brethren, the replenishing of the planet shall go on indefinitely. Another crop of socially unfit is periodically yielded by the release of "cured" charges from the hospitals for the insane, the homes for the feeble-minded, and similar institutions, although the great majority of them, if not always dangerous, are of hopeless social value. No less then the criminally abnormal, however, the have the privilege of increasing and multiplying. As an obvious remedy for these conditions, many state legislatures have sought to make provision for the eugenic sterilization of defective offenders and other wards of the state, upon their discharge from the various public institutions. The prescribed operation is comparatively simple and seldom dangerous. In males, it is known as vasectomy, and consists of a simple incision at the groin whereby the seminal cord is blocked, so that the sperm cells cannot be released by copulation. In the female, its technical name is salpingotomy, that is to say, the excision or removal of the Fallopian tubes to prevent the release of the ovum. Hence, no mutilation of any sort is involved in either case; and aside from bringing about impossibility of procreation, it carries no other consequences. There is no diminution of sexual ability, nor loss of pleasure in copulation. If performed upon an adult it does not affect the secondary sexual characteristics, such as the voice, the distribution of hair, or other specific attributes of the patient's sex. Far from being a recent experiment, the operation has been employed in special cases for more than thirty-five years, in the private practice of every general surgeon. The severance of the Fallopian tubes has been resorted to in cases where child-bearing was, for any reason, dangerous to the mother. Their complete removal has been indicated as the only remedy in cases of fibroid tumors or widespread gonorrheal infection. In the absence of special state laws, however, the legal position of the surgeon has been precarious, in cases that did not involve specific local disease. And when syphilitic or epileptic patients have requested the 122 [end]
Copyright 1999-2004: Cold Spring Harbor Laboratory; American Philosophical Society; Truman State University; Rockefeller Archive Center/Rockefeller University; University of Albany, State University of New York; National Park Service, Statue of Liberty National Monument; University College, London; International Center of Photography; Archiv zur Geschichte der Max-Planck-Gesellschaft, Berlin-Dahlem; and Special Collections, University of Tennessee, Knoxville.
The images and text in this Archive are solely for educational and scholarly uses. The materials may be used in digital or print form in reports, research, and other projects that are not offered for sale. Materials in this archive may not be used in digital or print form by organizations or commercial concerns, except with express permission.