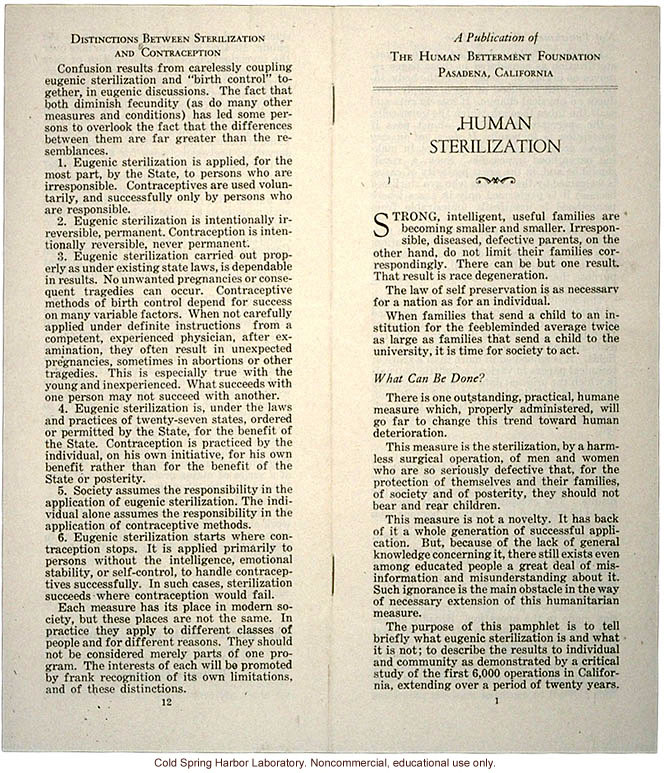 [left side] Distinctions Between Sterilization and Contraception Confusion results from carelessly coupling eugenic sterilization and "birth control" together, in eugenic discussions. The fact that both diminish fecundity (as do many other measures and conditions) has led some persons to overlook the fact that the differences between them are far greater than the resemblances. 1. Eugenic sterilization is applied, for the most part, by the State, to persons who are irresponsible. Contraceptives are used voluntarily, and successfully only by persons who are responsible. 2. Eugenic sterilization is intentionally irreversible, permanent. Contraception is intentionally reversible, never permanent. 3. Eugenic sterilizaton carried out properly as under existing state laws, is dependable in results. No unwanted pregnancies or consequent tragedies can occur. Contraceptive methods of birth control depend for success on many variable factors. When not carefully applied under definite instructions from a competent, experienced physician, after examination, they often result in unexpected pregnancies, sometimes in abortions or other tragedies. This is especially true with the young and inexperienced. What succeeds with one person may not succeed with another. 4. Eugenic sterilization is, under the laws and practices of twenty-seven states, ordered or permitted by the State, for the benefit of the State. Contraception is practiced by the individual, on his own initiative, for his own benefit rather than for the benefit of the State or prosperity. 5. Society assumes the responsibility in the application of eugenic sterilization. The individual alone assumes the responsibility in the application of contraceptive methods. 6. Eugenic sterilization starts where contraception stops. It is applied primarily to persons without the intelligence, emotional stability, or self-control, to handle contraceptives successfully. In such cases, sterilization succeeds where contraception would fail. Each measure has its place in modern society, but these places are not the same. In practice they apply to different classes of people and for different reasons. They should not be considered merely parts of one program. The interests of each will be promoted by frank recognition of its own limitations, and of these distinctions. 12 [right side] A Publication of The Human Betterment Foundation Pasadena, California [double hairline rule] Human Sterilization [scroll graphic] Strong, intelligent, useful families are becoming smaller and smaller. Irresponsible, diseased, defective parents, on the other hand, do not limit their families correspondingly. There can be but one result. The result is race degeneration. The law of self preservation is as necessary for a nation as for an individual. When families that send a child to an institution for the feebleminded average twice as large as families that send a child to the university, it is time for society to act. What Can Be Done? There is one outstanding, practical, humane measure which, properly administered, will go far to change this trend toward human deterioration. This measure is the sterilization, by a harmless surgical operation, of men and women who are so seriously defective that, for the protection of themselves and their families, of society and prosperity, they should not bear and rear children. This measure is not a novelty. It has back of it a whole generation of successful application. But, because of the lack of general knowledge concerning it, there still exists even among educated people a great deal of misunderstanding about it. Such ignorance is the main obstacle in the way of necessary extension of this humanitarian measure. The purpose of this pamphlet is to tell briefly what eugenic sterilization is and what it is not; to describe the results to individual and community as demonstrated by a critical study of the first 6,000 operations in California, extending over a period of twenty years. 1 [end]
Copyright 1999-2004: Cold Spring Harbor Laboratory; American Philosophical Society; Truman State University; Rockefeller Archive Center/Rockefeller University; University of Albany, State University of New York; National Park Service, Statue of Liberty National Monument; University College, London; International Center of Photography; Archiv zur Geschichte der Max-Planck-Gesellschaft, Berlin-Dahlem; and Special Collections, University of Tennessee, Knoxville.
The images and text in this Archive are solely for educational and scholarly uses. The materials may be used in digital or print form in reports, research, and other projects that are not offered for sale. Materials in this archive may not be used in digital or print form by organizations or commercial concerns, except with express permission.