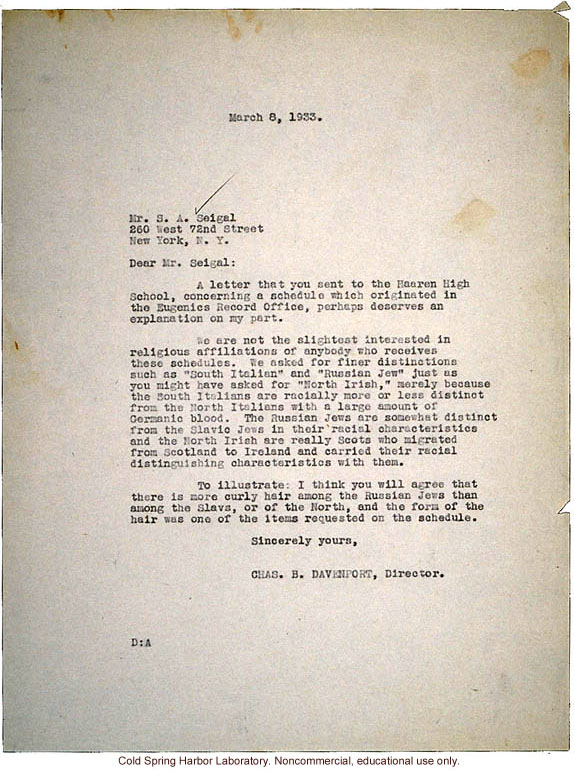 March 8, 1933. Mr. S. A. Siegel 260 West 72nd Street New York, N. Y. Dear Mr. Siegel: A letter that you sent to the Haaren High School, concerning a schedule which originated in the Eugenics Record Office, perhaps deserves an explanation on my part. We are not the slightest interested in religious affiliations of anybody who receives these schedules. We asked for finer distinctions such as "South Italian" and "Russian Jew" just as you might have asked for "North Irish," merely because the South Italians are racially more or less distinct from the North Italians with a large amount of Germanic blood. The Russian Jews are somewhat distinct from the Slavic Jews in their racial characteristics and the North Irish are really Scots who migrated from Scotland to Ireland and carried their racial distinguishing characteristics with them. To illustrate: I think you will agree that there is more curly hair among the Russian Jews than among the Slavs, or of the North, and the form of the hair was one of the items requested on the schedule. Sincerely yours, Chas. B. Davenport, Director. D:A [end]
Copyright 1999-2004: Cold Spring Harbor Laboratory; American Philosophical Society; Truman State University; Rockefeller Archive Center/Rockefeller University; University of Albany, State University of New York; National Park Service, Statue of Liberty National Monument; University College, London; International Center of Photography; Archiv zur Geschichte der Max-Planck-Gesellschaft, Berlin-Dahlem; and Special Collections, University of Tennessee, Knoxville.
The images and text in this Archive are solely for educational and scholarly uses. The materials may be used in digital or print form in reports, research, and other projects that are not offered for sale. Materials in this archive may not be used in digital or print form by organizations or commercial concerns, except with express permission.