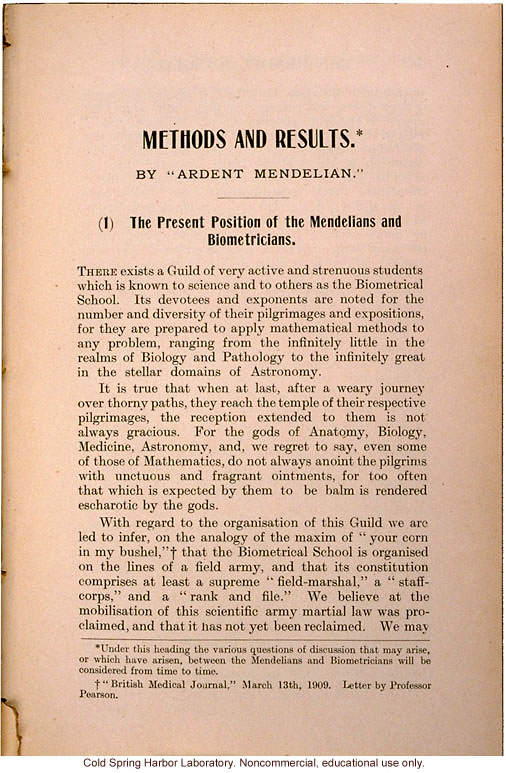 Methods and Results.* By "Ardent Mendelian." [centered hairline score] (1) The Present Position of the Mendelians and Biometricians. There exists a Guild of very active and strenuous students which is known to science and to others as the Biometrical School. Its devotees and exponents are noted for the number and diversity of their pilgrimages and expositions, for they are prepared to apply mathematical methods to any problem, ranging from the infinitely little in the realms of Biology and Pathology to the infinitely great in the stellar domains of Astronomy. It is true that when at last, after a weary journey over thorny paths, they reach the temple of their respective pilgrimages, the reception extended to them is not always gracious. For the gods of Anatomy, Biology, Medicine, Astronomy, and, we regret to say, even some of those of Mathematics, do not always anoint the pilgrims with unctuous and fragrant ointments, for too often that which is expected by them to be balm is rendered escharotic by the gods. With regard to the organisation of this Guild we are led to infer, on the analogy of the maxim of "your corn in my bushel," [dagger] that the Biometrical School is organised on the lines of a field army, and that its constitution comprises at least a supreme "field-marshal," a "staff-corps," and a "rank and file." We believe at the mobilisation of this scientific army martial law was proclaimed, and that it has not yet been reclaimed. We may [hairline rule] [footnotes]*Under this heading the various questions of discussion that may arise, or which have arisen, between the Mendelians and Biometricians will be considered from time to time. [dagger]"British Medical Journal," March 13th, 1909. Letter by Professor Pearson. [end]
Copyright 1999-2004: Cold Spring Harbor Laboratory; American Philosophical Society; Truman State University; Rockefeller Archive Center/Rockefeller University; University of Albany, State University of New York; National Park Service, Statue of Liberty National Monument; University College, London; International Center of Photography; Archiv zur Geschichte der Max-Planck-Gesellschaft, Berlin-Dahlem; and Special Collections, University of Tennessee, Knoxville.
The images and text in this Archive are solely for educational and scholarly uses. The materials may be used in digital or print form in reports, research, and other projects that are not offered for sale. Materials in this archive may not be used in digital or print form by organizations or commercial concerns, except with express permission.