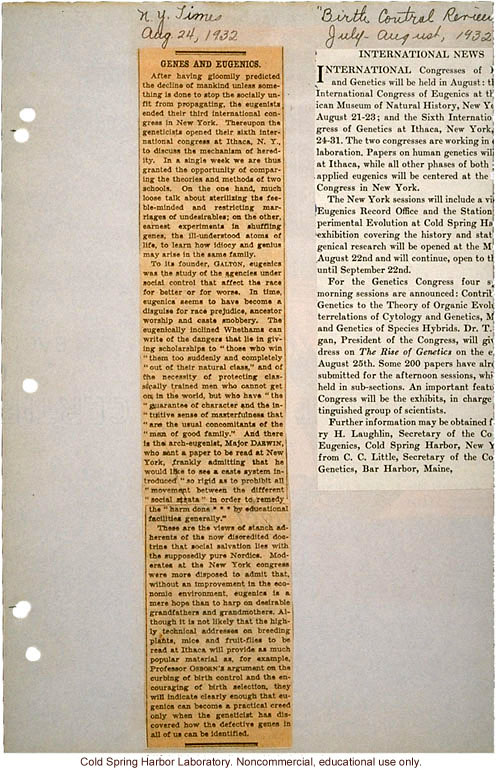 [left news article] N.Y.Times Aug.24, 1932 [double score] Genes and Eugenics After having gloomily predicted the decline of mankind unless something is done to stop the socially unfit from propagating, the eugenists ended their third international congress in New York. Thereupon the geneticists opened their sixth international congress at Ithaca, N. Y., to discuss the mechanism of heredity. In a single week we are thus granted the opportunity of comparing the theories and methods of two schools. On the one hand, much loose talk about sterilizing the feeble-minded and restricting marriages of undesirables; on the other, earnest experiments in shuffling genes, the ill-understood atoms of life, to learn how idiocy and genius may arise from the same family. To its founder, GALTON, eugenics was the study of the agencies under social control that affect the race for better or for worse. In time, eugenics seems to have become a disguise for race prejudice, ancestor worship and caste snobbery. The eugenically inclined Whethams can write of the dangers that lie in giving scholarships to "those who win them too suddenly and completely out of their natural class," and of the necessity of protecting classically trained men who cannot get on in the world, but who have "the guarantee of character and the intuitive sense of masterfulness that are the usual concomitants of the man of good family." And there is the arch-eugenist, Major DARWIN, who sent a paper to be read at New York, frankly admitting that he would like to see a caste system introduced "so rigid as to prohibit all movement between the different social strata" in order to remedy the "harm done * * * by educational facilities generally." These are the views of stanch adherents of the now discredited doctrine that social salvation lies with the supposedly pure Nordics. Moderates at the New York congress were more disposed to admit that, without an improvement in the economic environment, eugenics is a mere hope than to harp on desirable grandfathers and grandmothers. Although it is not likely that the highly technical addresses on breeding plants, mice and fruit-flies to be read at Ithaca will provide as much popular material as, for example, Professor OSBORN's argument on the curbing of birth control and the encouraging of birth selection, they will indicate clearly enough that eugenics can become a practical creed only when the geneticist has discovered how the defective genes in all of us can be identified. [double score] [end]
Copyright 1999-2004: Cold Spring Harbor Laboratory; American Philosophical Society; Truman State University; Rockefeller Archive Center/Rockefeller University; University of Albany, State University of New York; National Park Service, Statue of Liberty National Monument; University College, London; International Center of Photography; Archiv zur Geschichte der Max-Planck-Gesellschaft, Berlin-Dahlem; and Special Collections, University of Tennessee, Knoxville.
The images and text in this Archive are solely for educational and scholarly uses. The materials may be used in digital or print form in reports, research, and other projects that are not offered for sale. Materials in this archive may not be used in digital or print form by organizations or commercial concerns, except with express permission.