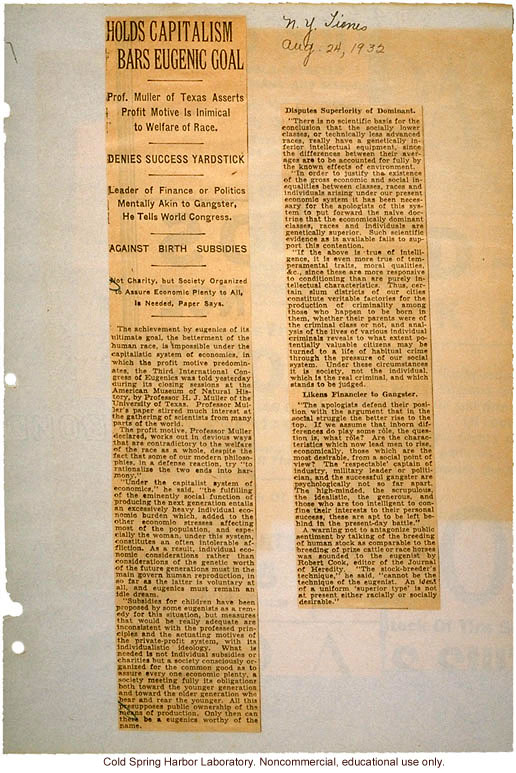 N.Y. Times Aug 24, 1932 Holds Capitalism Bars Eugenic Goal [centered score] Prof. Muller of Texas Asserts Profit Motive Is Inimical to Welfare of Race. [centered score] Denies Success Yardstick [centered score] Leader of Finance or Politics Mentally Akin to Gangster, He Tells World Congress. [centered score] Against Birth Subsidies [centered score] Not Charity, but Society Organized to Assure Economic Plenty to All, Is Needed, Paper Says. [centered score] The achievement of eugenics of its ultimate goal, the betterment of the human race, is impossible under the capitalistic system of economics, in which the profit mode predominates, the Third International Congress of Eugenics was told yesterday during its closing sessions at the American Museum of Natural History, by Professor H. J. Muller of the University of Texas. Professor Muller's paper stirred much interest at the gathering of scientists from many parts of the world. The profit motive, Professor Muller declared, works out in devious ways that are contradictory to the race as a whole, despite the fact that some of our modern philosophies, in a defense reaction, try "to rationalize the two ends into harmony." "Under the capitalist system of economics," he said, "the fulfilling of the eminently social function of producing the next generation entails an excessively heavy burden which, added to the other economic stresses affecting most of the population, and especially the woman, under the system, constitutes an often intolerable affliction. As a result, individual economic considerations rather than considerations of the genetic worth of the future generations must in the main govern human reproduction, in so far as the latter is voluntary at all; and must remain an idle dream. "Subsidies for children have been proposed by some eugenists as a remedy for this situation, but measures that would be really adequate are inconsistent with the professed principles and the actuating motives of the private-profit system, with its individualistic ideology. What is needed is not individual subsidies or charities but a society consciously organized for the common good as to assure every one economic plenty, a society meeting fully its obligations both toward the younger generation and toward the older generation who bear and rear the younger. All this presupposes public ownership of the means of production. Only then can there be a eugenics worthy of the name. Disputes Superiority of Dominant. "There is no scientific basis for the conclusion that the socially lower classes, or technically less advanced races, really have a genetically inferior intellectual equipment, since the differences between their averages are to be accounted for fully by the known effects of environment. "In order to justify the existence of the gross economic and social inequalities between classes, races and individuals arising under our present economic system it has been necessary for the apologists of this system to put forward the naďve doctrine that the economically dominant classes, races and individuals are genetically superior. Such scientific evidence as is available fails to support this contention. "If the above is true of intelligence, it is even more true of temperamental traits, moral qualities, &c., since these are more responsive to conditioning than are purely intellectual characteristics. Thus, certain slum districts of our cities constitute veritable factories for the production of criminality among those who happen to be born in them, whether their parents were of the criminal classes or not, and analysis of the lives of various individual criminals reveals to what extent potentially valuable citizens may be turned to a life of habitual crime through the pressure of our social system. Under these circumstances it is society, not the individual, which is the real criminal, and which stands to be judged. Likens Financier to Gangster. "The apologists defend their position with the argument that in the social struggle the better rise to the top. If we assume that inborn differences do play some role, the question is, what role? Are the characteristics which now lead men to rise, economically, those which are the most desirable, from a social point of view? The 'respectable' captain of industry, military leader or politician, and the successful gangster are psychologically not so far apart. The high-minded, the scrupulous, the idealistic, the generous, and those who are too intelligent to confine their interests to their personal success, these are apt to be left behind in the present-day battle." A warning not to antagonize public sentiment by talking of the breeding of human stock as comparable to the breeding of prize cattle or race horses was sounded to the eugenist by Robert Cook, editor of the Journal of Heredity. "The stock-breeder's technique," he said, "cannot be the technique of the eugenist. An ideal of a uniform 'superior type' is not at present either racially or socially desirable." [end]
Copyright 1999-2004: Cold Spring Harbor Laboratory; American Philosophical Society; Truman State University; Rockefeller Archive Center/Rockefeller University; University of Albany, State University of New York; National Park Service, Statue of Liberty National Monument; University College, London; International Center of Photography; Archiv zur Geschichte der Max-Planck-Gesellschaft, Berlin-Dahlem; and Special Collections, University of Tennessee, Knoxville.
The images and text in this Archive are solely for educational and scholarly uses. The materials may be used in digital or print form in reports, research, and other projects that are not offered for sale. Materials in this archive may not be used in digital or print form by organizations or commercial concerns, except with express permission.