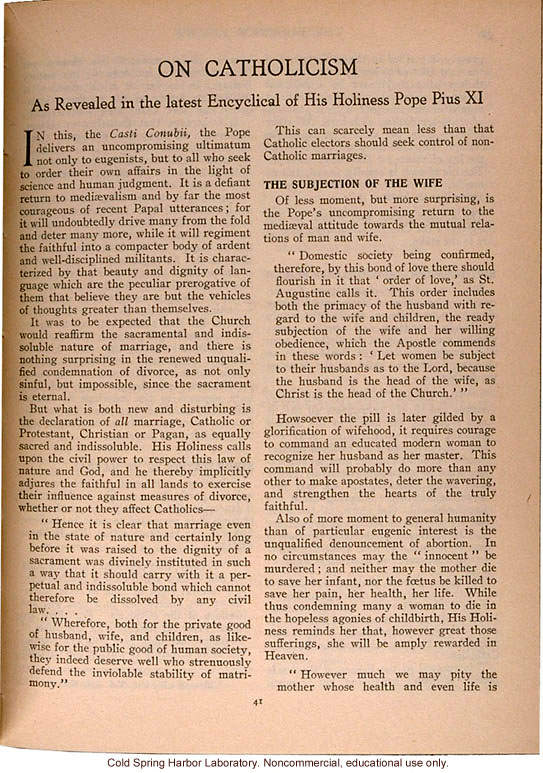 On Catholicism As Revealed in the latest Encyclical of His Holiness Pope Pius XI In this, the [italics]Casti Conubii[end italics], the Pope delivers an uncompromising ultimatum not only to eugenists, but to all who seek to order their own affairs in the light of science and human judgment. It is a defiant return to mediaevalism and by far the most courageous of recent Papal utterances; for it will undoubtedly drive many from the fold and deter many more, while it will regiment the faithful into a compacter body of ardent and well-disciplined militants. It is characterized by that beauty and dignity of language which are the particular perogative of them that believe they are but the vehicles of thoughts greater than themselves. It was to be expected that the Church would reaffirm the sacramental and indissoluble nature of marriage, and there is nothing surprising in the renewed unqualified condemnation of divorce, as not only sinful, but impossible, since the sacrament is eternal. But what is new and disturbing is the declaration of [italics]all[end italics] marriage, Catholic or Protestant, Christian or Pagan, as equally sacred and indissoluble. His Holiness calls upon the civil power to respect this law of nature and God, and he thereby implicitly adjures the faithful in all lands to exercise their influence against measures of divorce, whether or not they affect Catholics - "Hence it is clear that marriage even in the state of nature and certainly long before it was raised to the dignity of a sacrament was divinely instituted in such a way that it should carry with it a perpetual and indissoluble bond which cannot therefore be dissolved by any civil law... "Wherefore, both for the private good of husband, wife, and children, as likewise for the public good of human society, they indeed deserve well who strenuously defend the inviolable stability of matrimony." This can scarcely mean less than that Catholic electors should seek control of non-Catholic marriages. The Subjection of the Wife Of less moment, but more surprising, is the Pope's uncompromising return to the mediaeval attitude towards the mutual relations of man and wife. "Domestic society being confirmed, therefore, but this bond of love there should flourish in it that 'order of love,' as St. Augustine calls it. This order includes both the primacy of the husband with regard to the wife and children, the ready subjection of the wife and her willing obedience, which the Apostle commends in these words: "Let women be subject to their husbands as to the Lord, because the husband is the head of the wife, as Christ is the head of the Church." Howsoever the pill is later gilded by a glorification of wifehood, it requires courage to command an educated modern woman to recognize her husband as her master. This command will probably do more than any other to make apostates, deter the wavering, and strengthen the hearts of the truly faithful. Also of more moment to general humanity than of particular eugenic interest is the unqualified denouncement of abortion. In no circumstances may the "innocent" be murdered; and neither may the mother die to save her infant, nor the foetus be killed to save her pain, her health, her life. While thus condemning many a woman to die in the hopeless agonies of childbirth, His Holiness reminds her that, however great those sufferings, she will be amply rewarded in Heaven. "However much we may pity the mother whose health and even life is 41 [end]
Copyright 1999-2004: Cold Spring Harbor Laboratory; American Philosophical Society; Truman State University; Rockefeller Archive Center/Rockefeller University; University of Albany, State University of New York; National Park Service, Statue of Liberty National Monument; University College, London; International Center of Photography; Archiv zur Geschichte der Max-Planck-Gesellschaft, Berlin-Dahlem; and Special Collections, University of Tennessee, Knoxville.
The images and text in this Archive are solely for educational and scholarly uses. The materials may be used in digital or print form in reports, research, and other projects that are not offered for sale. Materials in this archive may not be used in digital or print form by organizations or commercial concerns, except with express permission.