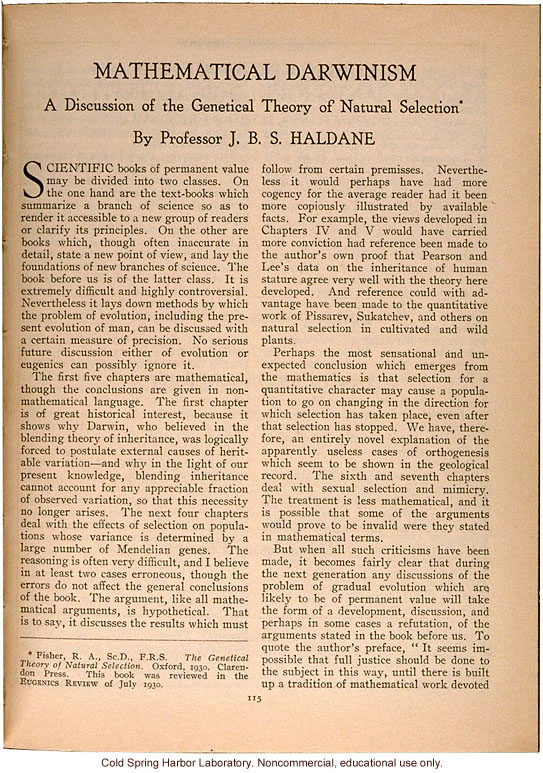 Mathematical Darwinism A Discussion of the Genetical Theory of Natural Selection* By Professor J. B. S. Haldane Scientific books of permanent value may be divided into two classes. On the one hand are the text-books which summarize a branch of science so as to render it accessible to a new group of readers or clarify its principles. On the other are books which, though often inaccurate in detail, state a new point of view, and lay the foundations of new branches of science. The book before us is of the latter class. It is extremely difficult and highly controversial. Nevertheless it lays down methods by which the problem of evolution, including the present evolution of man, can be discussed with a certain measure of precision. No serious future discussion either of evolution or eugenics can possibly ignore it. The first five chapters are mathematical, though the conclusions are given in non-mathematical language. The first chapter is of great historical interest, because it shows why Darwin, who believed in the blending theory of inheritance, was logically forced to postulate external causes of heritable variation - and why in the light of our present knowledge, blending inheritance cannot account for any appreciable fraction of observed variation, so that this necessity no longer arises. The next four chapters deal with the effects of selection on populations whose variance is determined by a large number of Mendelian genes. The reasoning is often very difficult, and I believe in the last two cases erroneous, though the errors do not affect the general conclusions of the book. The argument, like all mathematical arguments, is hypothethical. That is to say, it discusses the results which must follow from certain premises[sic]. Nevertheless it would perhaps have had more cogency for the average reader had it been more copiously illustrated by available facts. For example, the views developed in Chapters IV and V would have carried more conviction had reference been made to the author's own proof that Pearson and Lee's data on the inheritance of human stature agree very well with the theory here developed. And reference could with advantage have been made to the quantitative work of Pissarev, Sukatchev, and others on natural selection in cultivated and wild plants. Perhaps the most sensational and unexpected conclusion which emerges from the mathematics is that selection for a quantitative character may cause a population to go on changing in the direction for which selection has taken place, even after that selection has stopped. We have, therefore, an entirely novel explanation of the apparently useless cases of orthogenesis which seem to be shown in the geological record. The sixth and seventh chapters deal with sexual selection and mimicry. The treatment is less mathematical, and it is possible that some of the arguments would prove to be invalid were they stated in mathematical terms. But when all such criticisms have been made, it becomes fairly clear that during the next generation any discussions of the problem of gradual evolution which are likely to be of permanent value will take the form of a development, discussion , and perhaps in some cases a refutation, of the arguments stated in the book before us. To quote the author's preface, "It seems impossible that full justice should be done to the subject in this way, until there is built up a tradition of mathematical work devoted [footnote, left column] *Fisher, R. A., Sc.D., F.R.S. [italics]The Genetical Theory of Natural Selection.[end italics] Oxford, 1930. Clarendon Press. This book was reviewed in the Eugenics Review of July 1930. 115 [end]
Copyright 1999-2004: Cold Spring Harbor Laboratory; American Philosophical Society; Truman State University; Rockefeller Archive Center/Rockefeller University; University of Albany, State University of New York; National Park Service, Statue of Liberty National Monument; University College, London; International Center of Photography; Archiv zur Geschichte der Max-Planck-Gesellschaft, Berlin-Dahlem; and Special Collections, University of Tennessee, Knoxville.
The images and text in this Archive are solely for educational and scholarly uses. The materials may be used in digital or print form in reports, research, and other projects that are not offered for sale. Materials in this archive may not be used in digital or print form by organizations or commercial concerns, except with express permission.