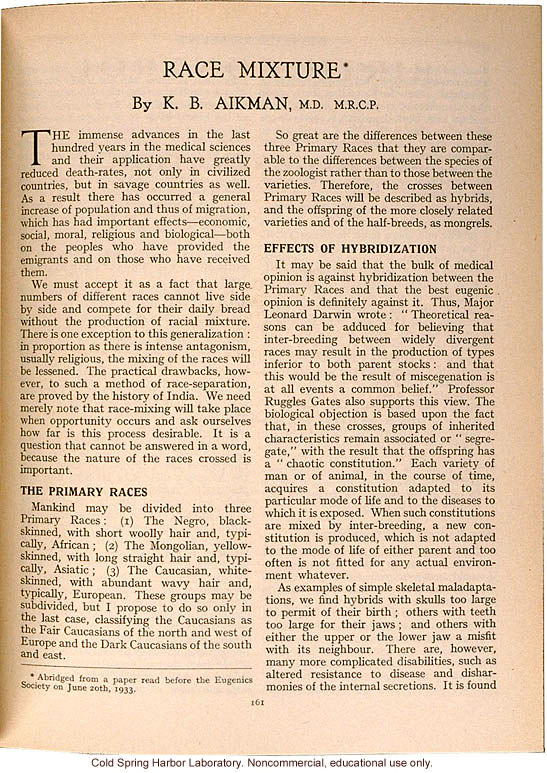 Race Mixture* By K.B. Aikman, M.D., M.R.C.P. The immense advances in the last hundred years in the medical sciences and their application have greatly reduced death-rates, not only in civilized countries, but in savage countries as well. As a result there has occurred a general increase of population and thus of migration, which has important effects - economic, social, moral, religious and biological - both on the peoples who have provided the emigrants and on those who have received them. We must accept it as fact that large numbers of different races cannot live side by side and compete for their daily bread without the production of racial mixture. There is one exception to this generalization: in proportion as there is intense antagonism, usually religious, the mixing of the races will be lessened. The practical drawbacks, however, to such a method of race-separation, are proved by the history of India. We need merely note that race-mixing will take place when opportunity occurs and ask ourselves how far is this process desirable. It is a question that cannot be answered in a word, because the nature of the races crossed is important. The Primary Races Mankind may be divided into three Primary Races: (I) The Negro, black-skinned, with short woolly hair and, typically, African; (2) The Mongolian, yellow-skinned, with long straight hair and, typically, Asiatic; (3) The Caucasian, white-skinned, with abundant wavy hair and, typically, European. These groups may be subdivided, but I propose to do so only in the last case, classifying the Caucasians as the Fair Caucasians of the north and west of Europe and the Dark Caucasians of the south and east. So great are the differences between these three Primary Races that they are comparable to the differences between the species of the zoologist rather than to those between the varieties. Therefore, the crosses between Primary Races will be described as hybrids, and the offspring of the more closely related varieties and of the half-breeds, as mongrels. Effects of Hybridization It may be said that the bulk of medical opinion is against hybridization between the Primary Races and that the best eugenic opinion is definitely against it. Thus, Major Leonard Darwin wrote: "Theoretical reasons can be adduced for believing that inter-breeding between widely divergent races may result in the production of types inferior to both parent stocks: and that this would be the result of miscegenation is at all events a common belief." Professor Ruggles Gates also supports this view. The biological objection is based upon the fact that, in these crosses, groups of inherited characteristics remain associated or "segregate," with the result that the offspring has a "chaotic constitution." Each variety of man or of animal, in the course of time, acquires a constitution adapted to its particular mode of life and to the diseases to which it is exposed. When such constitutions are mixed by inter-breeding, a new constitution is produced, which is not adapted to the mode of life of either parent and too often is not fitted for any actual environment whatever. As examples of simple skeletal maladaptations, we find hybrids with skulls too large to permit of their birth; other with teeth too large for their jaws; and others with either the upper or the lower jaw a misfit with its neighbour. There are, however, many more complicated disabilities, such as altered resistance to disease and disharmonies of the internal secretions. It is found [left side column-width hairline rule over footnote] *Abridged from a paper read before the Eugenics Society on June 20th, 1933. [folio]161 [end]
Copyright 1999-2004: Cold Spring Harbor Laboratory; American Philosophical Society; Truman State University; Rockefeller Archive Center/Rockefeller University; University of Albany, State University of New York; National Park Service, Statue of Liberty National Monument; University College, London; International Center of Photography; Archiv zur Geschichte der Max-Planck-Gesellschaft, Berlin-Dahlem; and Special Collections, University of Tennessee, Knoxville.
The images and text in this Archive are solely for educational and scholarly uses. The materials may be used in digital or print form in reports, research, and other projects that are not offered for sale. Materials in this archive may not be used in digital or print form by organizations or commercial concerns, except with express permission.