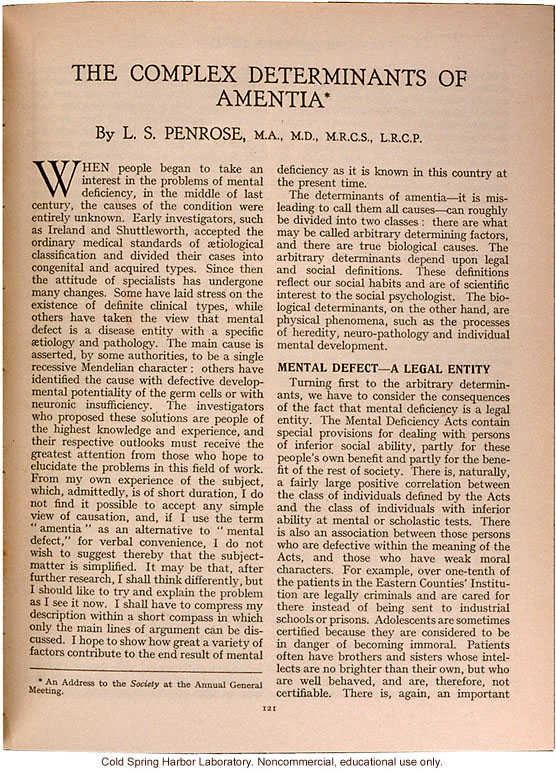 The Complex Determinants of Amentia* By L.S. Penrose, M.A., M.D., M.R.C.S., L.R.C.P When people began to take an interest in the problems of mental deficiency, in the middle of last century, the causes of the condition were entirely unknown. Early investigators, such as Ireland and Shuttleworth, accepted the ordinary medical standards of aetiological classification and divided their cases into congenital and acquired types. Since then the attitude of specialists has undergone many changes. Some have laid stress on the existence of definite clinical types, while others have taken the view that mental defect is a disease entity with a specific aetiology and pathology. The main cause is asserted, by some authorities, to be a single recessive Mendelian character: others have identified the cause with defective developmental potentiality of the germ cells or with neuronic insufficiency. The investigators who proposed these solutions are people of the highest knowledge and experience, and their respective outlooks must receive the greatest attention from those who hope to elucidate the problems in this field of work. From my own experience of the subject, which, admittedly, is of short duration, I do not find it possible to accept any simple view of causation, and, if I use the term "amentia" as an alternative to "mental defect," for verbal convenience, I do not wish to suggest thereby that the subject-matter is simplified. It may be that, after further research, I shall think differently, but I should like to try and explain the problem as I see it now. I shall have to compress my description within a short compass in which only the main lines of argument can be discussed. I hope to show how great a variety of factors contribute to the end result of mental deficiency as it is known in this country at the present time. The determinants of amentia - it is misleading to call them all causes - can roughly be divided into two classes: there are what may be called arbitrary determining factors, and there are true biological causes. The arbitrary determinants depend upon legal and social definitions. These definitions reflect our social habits and are of scientific interest to the social psychologist. The biological determinants, on the other hand, are physical phenomena, such as the processes of heredity, neuro-pathology and individual development. Mental Defect - A Legal Entity Turning first to the arbitrary determinants, we have to consider the consequences of the fact that mental deficiency is a legal entity. The Mental Deficiency Acts contain special provisions for dealing with persons of inferior social ability, partly for these people's own benefit and partly for the benefit of the rest of society. There is, naturally, a fairly large positive correlation between the class of individuals defined by the Acts and the class of individuals with inferior ability at mental or scholastic tests. There is also an association between those persons who are defective within the meaning of the Acts, and those who have weak moral characters. For example, over one-tenth of the patients in the Eastern Counties' Institution are legally criminals and are cared for there instead of being sent to industrial schools or prisons. Adolescents are sometimes certified because they are considered to be in danger of becoming immoral. Patients often have brothers and sisters whose intellects are no brighter than their own, but who are well behaved, and are, therefore, not certifiable. There is, again, an important [left side column-width hairline rule over footnote] [footnote]*An Address to the [italics]Society[end italics] at the Annual General Meeting. [folio]121 [end]
Copyright 1999-2004: Cold Spring Harbor Laboratory; American Philosophical Society; Truman State University; Rockefeller Archive Center/Rockefeller University; University of Albany, State University of New York; National Park Service, Statue of Liberty National Monument; University College, London; International Center of Photography; Archiv zur Geschichte der Max-Planck-Gesellschaft, Berlin-Dahlem; and Special Collections, University of Tennessee, Knoxville.
The images and text in this Archive are solely for educational and scholarly uses. The materials may be used in digital or print form in reports, research, and other projects that are not offered for sale. Materials in this archive may not be used in digital or print form by organizations or commercial concerns, except with express permission.