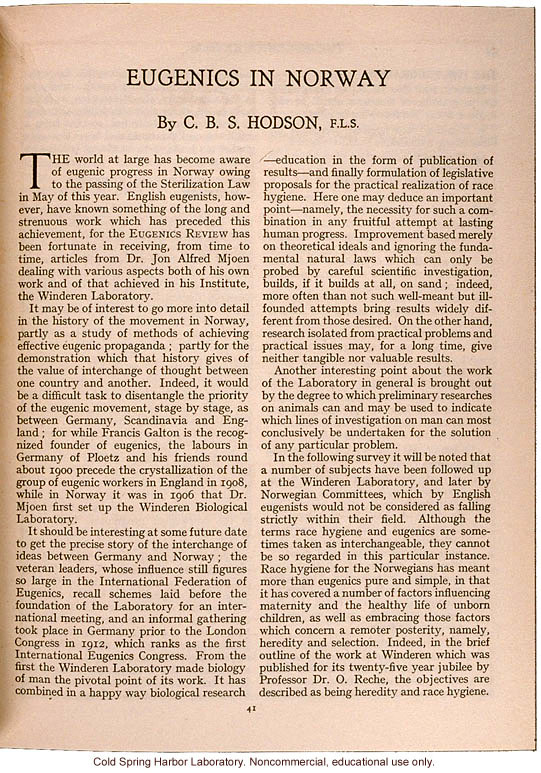 Eugenics in Norway By C. B. S. Hodson, F.L.S. The world at large has become aware of eugenic progress in Norway owing to the passing of the Sterilization Law in May of this year. English eugenists, however, have known something of the long and strenuous work which has preceded this achievement, for the Eugenics Review has been fortunate in receiving, from time to time, articles from Dr. Jon Alfred Mjoen dealing with various aspects both of his own work and of that achieved in his Institute, the Winderen Laboratory. It may be of interest to go more into detail in the history of the movement in Norway, partly as a study of methods of achieving effective eugenic propaganda; partly for the demonstration which that history gives of the value of interchange of thought between one country and another. Indeed, it would be a difficult task to disentangle the priority if the eugenic movement, stage by stage, as between Germany, Scandinavia and England; for while Francis Galton is the recognized founder of eugenics, the labours in Germany of Ploetz and his friends round about 1900 precede the crystallization of the group of eugenic workers in England in 1908, while in Norway it was in 1906 that Dr. Mjoen first set up the Wnderen Biological Laboratory. It should be interesting at some future date to get the precise story of the interchange of ideas between Germany and Norway; the veteran leaders, whose influence still figures so large in the International Federation of Eugenics, recall schemes laid before the foundation of the Laboratory for an international meeting, and in informal gathering took place in Germany prior to the London Congress in 1912, which ranks as the first International Eugenics Congress. From the first the Winderen Laboratory made biology of man the pivotal point of its work. It has combined in a happy way biological research - education in the form of publication of results - and finally formulation of legislative proposals for the practical realization of race hygiene. Here one may deduce an important point - namely, the necessity for such a combination in any fruitful attempt at lasting human progress. Improvement based merely on theoretical ideals and ignoring the fundamental natural laws which can only be probed by careful scientific investigation, builds, if it builds at all, on sand; indeed, more often than not such well-meant but ill-founded attempts bring results widely different from those desired. On the other hand, research isolated from practical problems and practical issues may, for a long time, give neither tangible nor valuable results. Another interesting point about the work of the Laboratory in general is brought out by the degree to which preliminary researches on animals can and may be used to indicate which lines of investigation on man can most conclusively be undertaken for the solution of any particular problem. In the following survey it will be noted that a number of subjects have been followed up at the Winderen Laboratory, and later by Norwegian Committees, which by English eugenists would not be considered as falling strictly within their field. Although the terms race hygiene and eugenics are sometimes taken as interchangeable, they cannot be so regarded in this particular instance. Race hygiene for the Norwegians has meant more than eugenics pure and simple, in that it has covered a number of factors influencing maternity and the healthy life of unborn children, as well as embracing those factors which concern a remoter posterity, namely, heredity and selection. Indeed, in the bried outline of the work at Winderen which was published for its twenty-five year jubilee by Professor Dr. O. Reche, the objectives are described as being heredity and race hygiene. 41 [end]
Copyright 1999-2004: Cold Spring Harbor Laboratory; American Philosophical Society; Truman State University; Rockefeller Archive Center/Rockefeller University; University of Albany, State University of New York; National Park Service, Statue of Liberty National Monument; University College, London; International Center of Photography; Archiv zur Geschichte der Max-Planck-Gesellschaft, Berlin-Dahlem; and Special Collections, University of Tennessee, Knoxville.
The images and text in this Archive are solely for educational and scholarly uses. The materials may be used in digital or print form in reports, research, and other projects that are not offered for sale. Materials in this archive may not be used in digital or print form by organizations or commercial concerns, except with express permission.