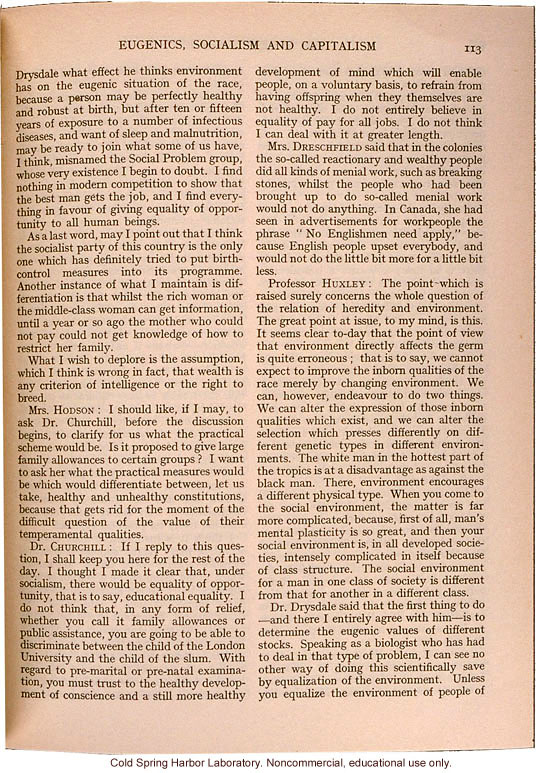 Eugenics, Socialism and Capitalism 113 Drysdale what effect he thinks environment has on the eugenic situation of the race, because a person may be perfectly healthy and robust at birth, but after ten or fifteen years of exposure to a number of infectious diseases, and want of sleep and malnutrition, may be ready to join what some of us have, I think, misnamed the Social Problem group, whose very existence I begin to doubt. I find nothing in modern competition to show that the best man gets the job, and I find everything in favour of giving equality of opportunity to all human beings. As a last word, may I point out that I think the socialist party of this country is the only one which has definitely tried to put birth-control measures into its programme. Another instance of what I maintain is differentiation is that whilst the rich woman or the middle-class woman can get information, until a year or so ago the mother who could not pay could not get knowledge of how to restrict her family. What I wish to deplore is the assumption, which I think is wrong in fact, that wealth is any criterion of intelligence or the right to breed. Mrs. Hodson: I should like, if I may, to ask Dr. Churchill, before the discussion begins, to clarify for us what the practical scheme would be. Is it proposed to give large family allowances to certain groups? I want to ask her what the practical measures would be which would differentiate between, let us take, healthy and unhealthy constitutions, because that gets rid for the moment the difficult question of the value of their temperamental qualities. Dr. Churchill: If I reply to this question, I shall keep you here for the rest of the day. I thought I made it clear that, under socialism, there would be equality of opportunity, that is to say, educational equality. I do not think that, in any form of relief, whether you call it family allowances or public assistance, you are going to be able to discriminate between the child of London University and the child of the slum. With regard to pre-marital or pre-natal examination, you must trust to the healthy development of conscience and a still more healthy development of mind which will enable people, on a voluntary basis, to refrain from having offspring when they themselves are not healthy. I do not entirely believe in equality of pay for all jobs. I do not think I can deal with it at greater length. Mrs. Dreschfield said that in the colonies the so-called reactionary and wealthy people did all kinds of menial work, such as breaking stones, whilst the people who had been brought up to do so-called menial work would not do anything. In Canada, she had seen advertisements for workpeople the phrase "No Englishmen need apply," because English people upset everybody, and would not do the little bit more for a little bit less. Professor Huxley: The point which is raised surely concerns the whole question of the relation of heredity and enviroment. The great point at issue, to my mind, is this. It seems clear to-day that the point of view that environment directly affects the germ is quite erroneous; that is to say, we cannot expect to improve the inborn qualities of the race merely by changing environment. We can, however, endeavour to do two things. We can alter the expression of those inborn qualities which exist, and we can alter the selection which presses differently on different genetic types in different environments. The white man in the hottest part of the tropics is at a disadvantage as against the black man. There, environment encourages a different physical type. When you come to the social environment, the matter is far more complicated, because, first of all, man's mental plasticity is so great, and then your social environment is, in all developed societies, intensely complicated in itself because of class structure. The social environment for a man in one class of society is different from that for another in a different class. Dr. Drysdale said that the first thing to do - and there I entirely agree with him - is to determine the eugenic values of different stocks. Speaking as a biologist who has had to deal in that type of problem, I can see no other way of doing this scientifically save by equalization of the environment. Unless you equalize the environment of people of [end]
Copyright 1999-2004: Cold Spring Harbor Laboratory; American Philosophical Society; Truman State University; Rockefeller Archive Center/Rockefeller University; University of Albany, State University of New York; National Park Service, Statue of Liberty National Monument; University College, London; International Center of Photography; Archiv zur Geschichte der Max-Planck-Gesellschaft, Berlin-Dahlem; and Special Collections, University of Tennessee, Knoxville.
The images and text in this Archive are solely for educational and scholarly uses. The materials may be used in digital or print form in reports, research, and other projects that are not offered for sale. Materials in this archive may not be used in digital or print form by organizations or commercial concerns, except with express permission.