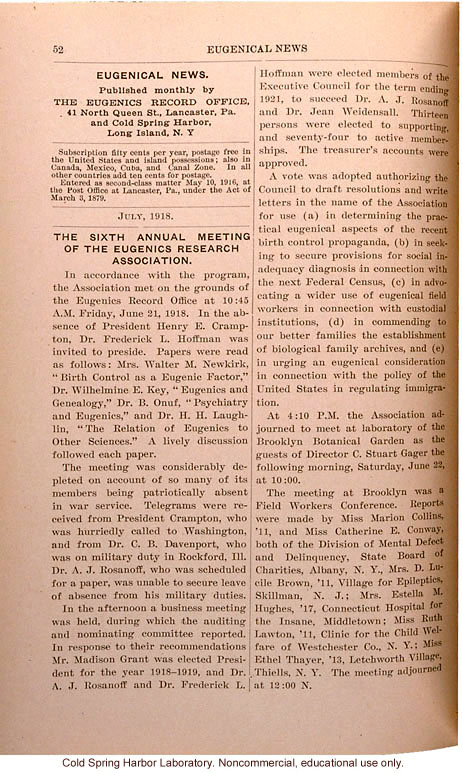 52 Eugenical News Eugenical News. Published monthly by The Eugenics Record Office, 41 North Queen St., Lancaster, Pa. and Cold Spring Harbor, Long Island, N.Y. Subscription fifty cents per year, postage free in the United States and island possessions; also in Canada, Mexico, Cuba, and Canal Zone. In all other countries add ten cents for postage. Entered as second-class matter May 10, 1916, at the Post Office at Lancaster, Pa., under the Act of March 3, 1879. July, 1918. The Sixth Annual Meeting of the Eugenics Research Association. In accordance with the program, the Association met on the grounds of the Eugenics Record Office at 10:45 A.M. Friday, June 21, 1918. In the absence of President Henry E. Crampton, Dr. Frederick L Hoffman was invited to preside. Papers were read as follows: Mrs. Walter M. Newkirk, "Birth Control as a Eugenic Factor," Dr. Wilhelmine E. Key, "Eugenics and Genealogy," Dr. B. Onuf, "Psychiatry and Eugenics," and Dr. H. H. Laughlin, "The Relation of Eugenics to Other Sciences." A lively discussion followed each paper. The meeting was considerably depleted on account of so many of its members being patriotically absent in war service. Telegrams were received from President Crampton, who was hurriedly called to Washington, and from Dr. C. B. Davenport, who was on military duty in Rockford, Ill. Dr. A. J. Rosanoff, who was scheduled for a paper, was unable to secure leave of absence from his military duties. In the afternoon a business meeting was held, during which the auditing and nominating committee reported. In response to their recommendations Mr. Madison Grant was elected President for the year 1918-1919, and Dr. A. J. Rosanoff and Dr. Frederick L. Hoffman were elected members of the Executive Council for the term ending 1921, to succeed Dr. A. J. Rosanoff and Dr. Jean Weidensall. Thirteen persons were elected to supporting, and seventy-four to active memberships. The treasurer's accounts were approved. A vote was adopted authorizing the Council to draft resolutions and write letters in the name of the Association for use (a) in determining the practical eugenical aspects of the recent birth control propaganda, (b) in seeking to secure provisions for social inadequacy diagnosis in connection with the next Federal Census, (c) in advocating a wider use of eugenical field workers in connection with custodial institutions, (d) in commending to our better families the establishment of biological family archives, and (e) in urging an eugenical consideration in connection with the policy of the United States in regulating immigration. At 4:10 P.M. the Association adjourned to meet at laboratory of the Brooklyn Botanical Garden as the guests of Director C. Stuart Gager the following morning, Saturday, June 22, at 10:00. The meeting at Brooklyn was a Field Workers Conference. Reports were made by Miss Marion Collins, '11, and Miss Catherine E. Conway, both of the Division of Mental Defect and Delinquency, State Board of Charities, Albany, N.Y., Mrs. D. Lucile Brown, '11, Village for Epileptics, Skillman, N. J.; Mrs. Estella M. Hughes, '17, Connecticut Hospital for the Insane, Middletown; Miss Ruth Lawton, '11, Clinic for the Child Welfare of Westchester Co., N.Y.; Miss Ethel Thayer, '13; Letchworth Village, Thiells, N. Y. The meeting adjourned at 12:00 N. [end]
Copyright 1999-2004: Cold Spring Harbor Laboratory; American Philosophical Society; Truman State University; Rockefeller Archive Center/Rockefeller University; University of Albany, State University of New York; National Park Service, Statue of Liberty National Monument; University College, London; International Center of Photography; Archiv zur Geschichte der Max-Planck-Gesellschaft, Berlin-Dahlem; and Special Collections, University of Tennessee, Knoxville.
The images and text in this Archive are solely for educational and scholarly uses. The materials may be used in digital or print form in reports, research, and other projects that are not offered for sale. Materials in this archive may not be used in digital or print form by organizations or commercial concerns, except with express permission.