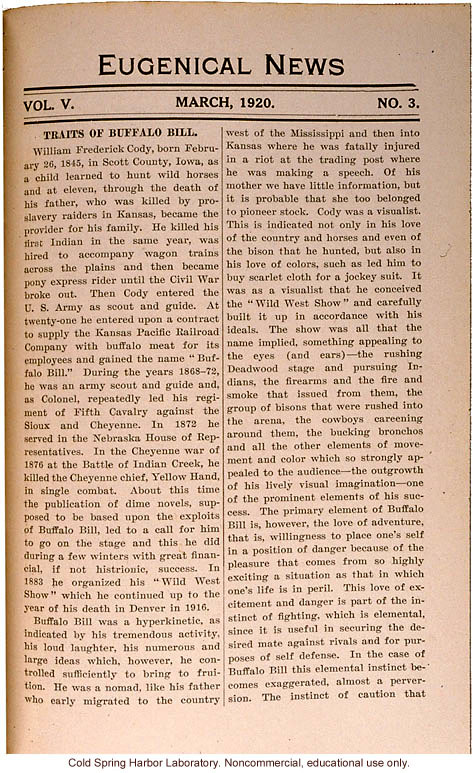 Eugenical News Vol. V. March, 1920. No. 3 Traits of Buffalo Bill. William Frederick Cody, born February 26, 1845, in Scott County, Iowa, as a child learned to hunt wild horses and at eleven, through the death of his father, who was killed by pro-slavery raiders in Kansas, became the provider for his family. He killed his first Indian in the same year, was hired to accompany wagon trains across the plains and then became a pony express rider until the Civil War broke out. Then Cody entered the U. S. Army as scout and guide. At twenty-one he entered upon a contract to supply the Kansas Pacific Railroad Company with buffalo meat for its employees and gained the name "Buffalo Bill." During the years 1868-72, he was an army scout and guide and, as Colonel, repeatedly led his regiment of Fifth Cavalry against the Sioux and Cheyenne. In 1872 he served in the Nebraska House of Representatives. In the Cheyenne was of 1876 at the Battle of Indian Creek, he killed the Cheyenne chief, Yellow Hand, in single combat. About this time the publication of dime novels, supposed to be based upon the exploits of Buffalo Bill, led to a call for him to go on the stage and this he did during a few winters with great financial, if not histrionic, success. In 1883 he organized his "Wild West Show" which he continued up to the year of his death in Denver in 1916. Buffalo Bill was a hyperkinetic, as indicated by his tremendous activity, his loud laughter, his numerous and large ideas which, however, he controlled sufficiently to bring to fruition. He was a nomad, like his father who early migrated to the country west of the Mississippi and then into Kansas where he was fatally injured in a riot at the trading post where he was making a speech. Of his mother we have little information, but it is probably that she too belonged to pioneer stock. Cody was a visualist. This is indicated not only in his love of the country and horses and even of the bison that he hunted, but also in his love of colors, such as led him to buy scarlet cloth for a jockey suit. It was as a visualist that he conceived the "Wild West Show" and carefully built it up in accordance with his ideals. The show was all that the name implied, something appealing to the eyes (and ears) - the rushing Deadwood Stage and pursuing Indians, the firearms and the fire and smoke that issued from them, the group of bisons that were rushed into the arena, the cowboys careening around them, the bucking bronchos and all the other elements of movement and color which so strongly appealed to the audience - the outgrowth of his lively visual imagination - one of the prominent elements of his success. The primary element of Buffalo Bill is, however, the love of adventure, that is, willingness to place one's self in a position of danger because of the pleasure that comes from so highly exciting a situation as that in which one's life is in peril. This love of excitement and danger is part of the instinct of fighting, which is elemental, since it is useful in securing the desired mate against rivals and for purposes of self defense. In the case of Buffalo Bill this elemental instinct becomes exaggerated, almost a perversion. The instinct of caution that [end]
Copyright 1999-2004: Cold Spring Harbor Laboratory; American Philosophical Society; Truman State University; Rockefeller Archive Center/Rockefeller University; University of Albany, State University of New York; National Park Service, Statue of Liberty National Monument; University College, London; International Center of Photography; Archiv zur Geschichte der Max-Planck-Gesellschaft, Berlin-Dahlem; and Special Collections, University of Tennessee, Knoxville.
The images and text in this Archive are solely for educational and scholarly uses. The materials may be used in digital or print form in reports, research, and other projects that are not offered for sale. Materials in this archive may not be used in digital or print form by organizations or commercial concerns, except with express permission.