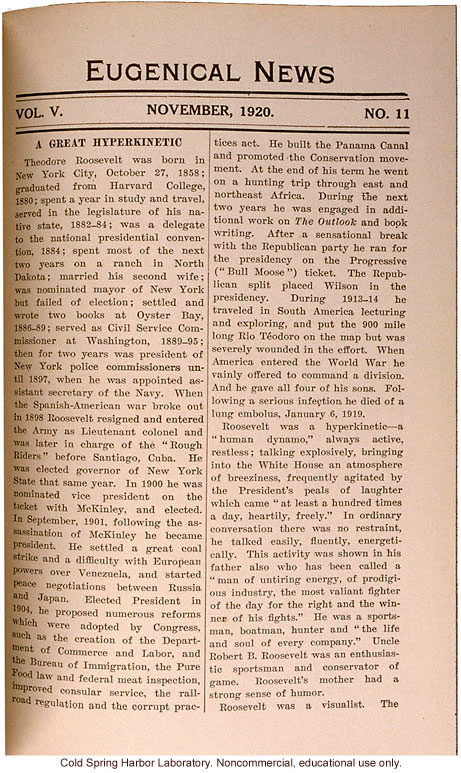 Eugenical News Vol. V. November, 1920. No. 11 A Great Hyperkinetic Theodore Roosevelt was born in New York City, October 27, 1858; graduated from Harvard College, 1880; spent a year in study and travel, served in the legislature of his native state, 1882-84; was a delegate to the national presidential convention, 1884; spent most of the next two years on a ranch in North Dakota; married his second wife; was nominated mayor of New York but failed of election; settled and wrote two books at Oyster Bay, 1886-89; served as Civil Service Commissioner at Washington, 1889-95; then for two years was president of New York police commissioners until 1897, when he was appointed assistant secretary of the Navy. When the Spanish-American war broke out in 1989 Roosevelt resigned and entered the Army as Lieutenant colonel and was later in charge of the "Rough Riders" before Santiago, Cuba. He was elected governor of New York State that same year. In 1900 he was nominated vice president on the ticket with McKinley, and elected. In September, 1901, following the assassination of McKinley he became president. He settled a great coal strike and a difficulty with European powers over Venezuela, and started peace negotiations between Russia and Japan. Elected President in 1904, he proposed numerous reforms which were adopted by Congress, such as the creation of the Department of Commerce and Labor, and the Bureau of Immigration, the Pure Food law and federal meat inspection, improved consular service, the railroad regulation and the corrupt practices act. He built the Panama Canal and promoted the Conservation movement. At the end of his term he went on a hunting trip through east and northeast Africa. During the next two years he was engaged in additional work on [italics]The Outlook[end italics] and book writing. After a sensational break with the Republican party he ran for the presidency on the Progressive ("Bull Moose") ticket. The Republican split placed Wilson in the presidency. During 1913-14 he traveled in South America lecturing and exploring, and put the 900 mile long Rio T[acute accent over 'e']odoro on the map but was severely wounded in the effort. When American entered the World War he vainly offered to command a division. And he gave all four of his sons. Following a serious infection he died of a lung embolus, January 6, 1919. Roosevelt was a hyperkinetic - a "human dynamo," always active, restless; talking explosively, bringing into the White House an atmosphere of breeziness, frequently agitated by the President's peals of laughter which came "at least a hundred times a day, heartily, freely." In ordinary conversation there was no restraint, he talked easily, fluently, energetically. This activity was shown in his father also who has been called a "man of untiring energy, of prodigious industry, the most valiant fighter of the day for the right and the winner of his fights." He was a sportsman, boatman, hunter and "the life and soul of every company." Uncle Robert B. Roosevelt was an enthusiastic sportsman and conservator of game. Roosevelt's mother had a strong sense of humor. Roosevelt was a visualist. The [end]
Copyright 1999-2004: Cold Spring Harbor Laboratory; American Philosophical Society; Truman State University; Rockefeller Archive Center/Rockefeller University; University of Albany, State University of New York; National Park Service, Statue of Liberty National Monument; University College, London; International Center of Photography; Archiv zur Geschichte der Max-Planck-Gesellschaft, Berlin-Dahlem; and Special Collections, University of Tennessee, Knoxville.
The images and text in this Archive are solely for educational and scholarly uses. The materials may be used in digital or print form in reports, research, and other projects that are not offered for sale. Materials in this archive may not be used in digital or print form by organizations or commercial concerns, except with express permission.