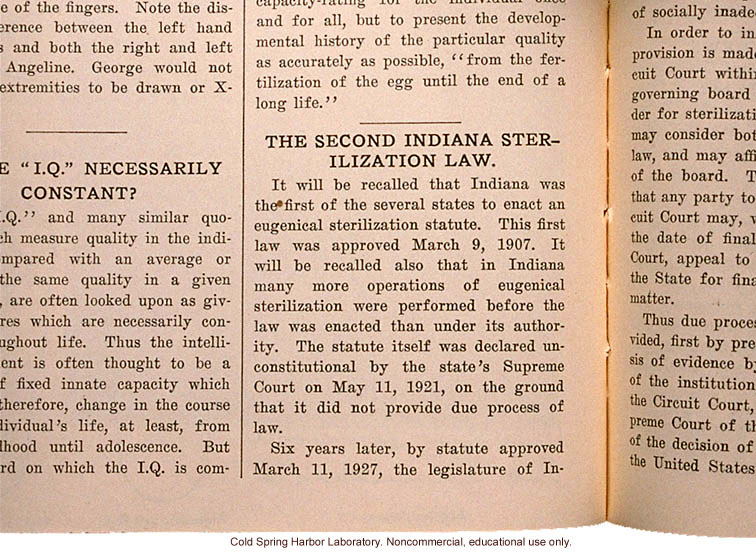 [centered score] The Second Indiana Sterilization Law. It will be recalled that Indiana was the first of several states to enact an eugenical sterilization statute. This first law was approved March 9, 1907. It will be recalled also that in Indiana many more operations of eugenical sterilization were performed before the law was enacted than under its authority. The statute itself was declared unconstitutional by the state's Supreme Court on May 11, 1921, on the ground that it did not provide due process of law. Six years later, by statute approved March 11, 1927, the legislature of In- [end]
Copyright 1999-2004: Cold Spring Harbor Laboratory; American Philosophical Society; Truman State University; Rockefeller Archive Center/Rockefeller University; University of Albany, State University of New York; National Park Service, Statue of Liberty National Monument; University College, London; International Center of Photography; Archiv zur Geschichte der Max-Planck-Gesellschaft, Berlin-Dahlem; and Special Collections, University of Tennessee, Knoxville.
The images and text in this Archive are solely for educational and scholarly uses. The materials may be used in digital or print form in reports, research, and other projects that are not offered for sale. Materials in this archive may not be used in digital or print form by organizations or commercial concerns, except with express permission.