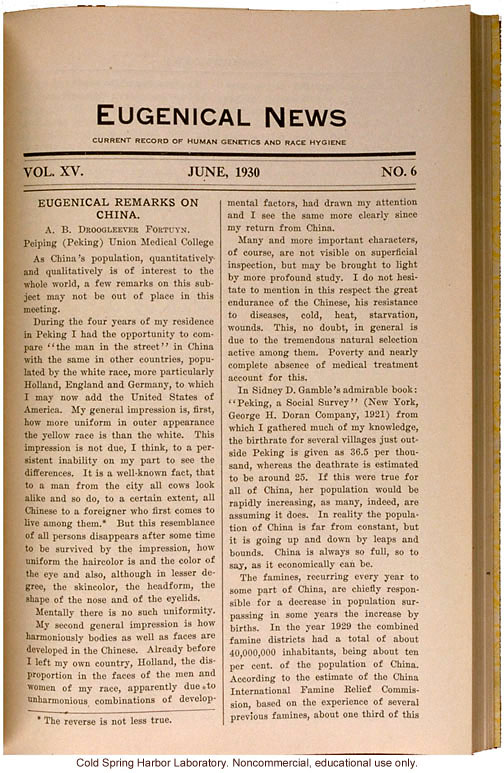 Eugenical News Current Record of Human Genetics and Race Hygiene [double score] Vol. XV. June, 1930 No. 6 [double score] Eugenical Remarks on China. A. B. Droogleever Fortuyn. Peiping (Peking) Union Medical College As China's population, quantitatively and qualitatively is of interest to the whole world, a few remarks on this subject may not be out of place in this meeting. During the four years of my residence in Peking I had the opportunity to compare "the man in the street" in China with the same in other countries, populated by the white race, more particularly Holland, England and Germany, to which I may now add the United States of America. My general impression is first, how more uniform in outer appearance the yellow race is than the white. This impression is not due, I think, to a persistent inability on my part to see the differences. It is a well known fact, that to a man from the city all cows look alike and so do, to a certain extent, all Chinese to a foreigner who first comes to live among them.* But this resemblance of all persons disappears after some time to be survived by the impression, how uniform the haircolor is and the color of the eye and also, although in lesser degree, the skincolor, the headform, the shape of the nose and of the eyelids. Mentally there is no such uniformity. My second general impression is how harmoniously bodies as well as faces are developed in the Chinese. Already before I left my own country, Holland, the disproportion in the faces of the men and women of my race, apparently due to unharmonious combinations of developmental factors, had drawn my attention and I see the same more clearly since my return from China. Many and more important characters, of course, are not visible on superficial inspection, but may be brought to light by more profound study. I do not hesitate to mention in this respect the great endurance of the Chinese, his resistance to diseases, cold, heat, starvation, wounds. This, no doubt, in general is due to the tremendous natural selection active among them. Poverty and nearly complete absence of medical treatment account for this. In Sidney D. Gamble's admirable book: "Peking, a Social Survey" (New York, George H. Doran Company, 1921) from which I gathered much of my knowledge, the birthrate for several villages just outside Peking is given as 36.5 per thousand, whereas the deathrate is estimated to be around 25. If this were true for all of China, here population would be rapidly increasing, as many, indeed, are assuming it does. In reality the population of China is far from constant, but it is going up and down by leaps and bounds. China is always so full, so to say, as it economically can be. The famines, recurring every year to some part of China, are chiefly responsible for a decrease in population surpassing in some years the increase by births. In the year 1929 the combined famine districts had total of about 40,000,000 inhabitants, being about ten per cent. of the population of China. According to the estimate of the China International Famine Relief Commission, based on the experience of several previous families, about one third of this [left side column-width hairline rule over footnote] [footnote]* The reverse is no less true. [end]
Copyright 1999-2004: Cold Spring Harbor Laboratory; American Philosophical Society; Truman State University; Rockefeller Archive Center/Rockefeller University; University of Albany, State University of New York; National Park Service, Statue of Liberty National Monument; University College, London; International Center of Photography; Archiv zur Geschichte der Max-Planck-Gesellschaft, Berlin-Dahlem; and Special Collections, University of Tennessee, Knoxville.
The images and text in this Archive are solely for educational and scholarly uses. The materials may be used in digital or print form in reports, research, and other projects that are not offered for sale. Materials in this archive may not be used in digital or print form by organizations or commercial concerns, except with express permission.