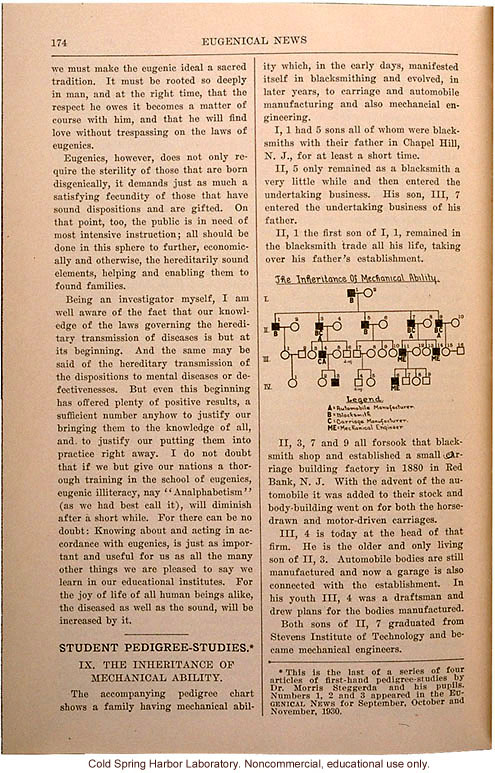 174 Eugenical News We must make the eugenic ideal a sacred tradition. It must be rooted so deeply in man, and at the right time, that the respect he owes it becomes a matter of course with him, and that he will find love without trespassing on the laws of eugenics. Eugenics, however, does not only require the sterility of those that are born disgenically, it demands just as much a satisfying fecundity of those that have sound dispositions and are gifted. On that point, too, the public is in need of most intensive instruction; all should be done in this sphere to further, economically and otherwise, the hereditarily sound elements, helping and enabling them to found families. Being an investigator myself, I am well aware of the fact that our knowledge of the laws governing the hereditary transmission of diseases is but at its beginning. And the same may be said of the hereditary transmission of the dispositions to mental diseases or defectivenesses. But even this beginning has offered plenty of positive results, a sufficient number anyhow to justify our bringing them to the knowledge of all, and to justify our putting them into practice right away. I do not doubt that if we but give our nations a thorough training in the school of eugenics, eugenic illiteracy, nay "Analphabetism" (as we had best call it), will diminish after a short while. For there can be no doubt: Knowing about and acting in accordance with eugenics, is just as important and useful for us as all the many other things we are pleased to say we learn in our educational institutes. For the joy of life of all human beings alike, the diseased as well as the sound, will be increased by it. Student Pedigree-Studies.* IX. The Inheritance of Mechanical Ability. The accompanying pedigree chart shows a family having mechanical ability which, in the early days, manifested itself in blacksmithing and evolved, in later years, to carriage and automobile manufacturing and also mechanical engineering. I, 1 had 5 sons all of whom were blacksmiths with their father in Chapel Hill, N. J., for at least a short time. II, 5 only remained as a blacksmith a very little while and then entered the undertaking business. His son, III, 7 entered the undertaking business of his father. II, 1 the first son of I, 1, remained in the blacksmith trade all his life, taking over his father's establishment. [pedigree chart] II, 3, 7 and 9 all forsook that blacksmith shop and established a small carriage building factory in 1880 in Red Bank, N. J. With the advent of the automobile it was added to their stock and body-building went on for both the horse-drawn and motor-driven carriages. III, 4 is today at the head of that firm. He is the older and only living son of II, 3. Automobile bodies are still manufactured and now a garage is also connected with the establishment. In his youth III, 4 was a draftsman and drew plans for the bodies manufactured. Both sons of II, 7 graduated from Stevens Institute of Technology and became mechanical engineers. [right side column-width hairline rule over footnote] [footnote]*This is the last of a series of four articles of first-hand pedigree-studies by Dr. Morris Steggerda and his pupils. Numbers 1, 2 and 3 appeared in the Eugenical News for September, October and November, 1930 [end]
Copyright 1999-2004: Cold Spring Harbor Laboratory; American Philosophical Society; Truman State University; Rockefeller Archive Center/Rockefeller University; University of Albany, State University of New York; National Park Service, Statue of Liberty National Monument; University College, London; International Center of Photography; Archiv zur Geschichte der Max-Planck-Gesellschaft, Berlin-Dahlem; and Special Collections, University of Tennessee, Knoxville.
The images and text in this Archive are solely for educational and scholarly uses. The materials may be used in digital or print form in reports, research, and other projects that are not offered for sale. Materials in this archive may not be used in digital or print form by organizations or commercial concerns, except with express permission.