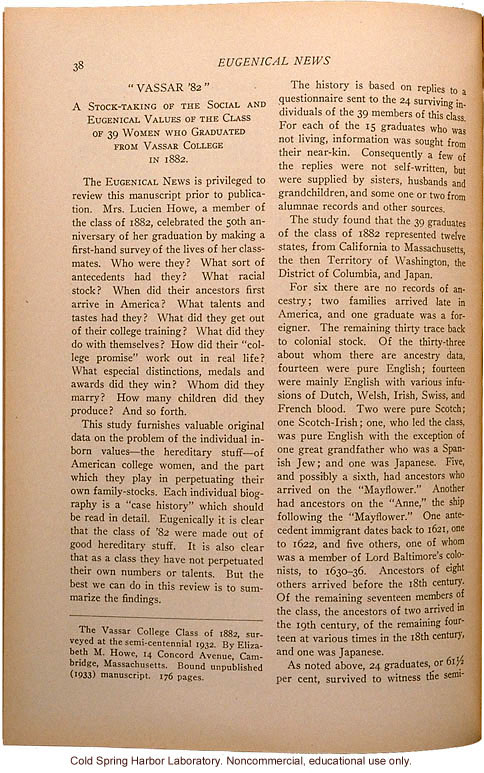 38 Eugenical News "VASSAR '82" A Stock-Taking of the Social and Eugenical Values of the Class of 39 Women Who Graduated From Vassar College in 1882. The Eugenical News is privileged to review this manuscript prior to publication. Mrs. Lucien Howe, a member of the class of 1882, celebrated the 50th anniversary of her graduation by making a first-hand survey of the lives of her classmates. Who were they? What sort of antecedents had they? What racial stock? When did their ancestors first arrive in America? What talents and tastes had they? What did they get out of their college training? What did they do with themselves? How did their "college promise" work out in real life? What especial distinctions, medal and awards did they win? Whom did they marry? How many children did they produce? And so forth. This study furnishes valuable original data on the problem of the individual inborn values - the hereditary stuff - of American college women, and the part which they play in perpetuating their own family-stocks. Each individual biography is a "case history" which should be read in detail. Eugenically it is clear that the class of '82 was made out of good hereditary stuff. It is also clear that as a class they have not perpetuated their own numbers or talents. But the best we can do in this review is to summarize the findings. [hairline column-width rule] [footnote]The Vassar College Class of 1882, surveyed at the semi-centennial 1932. By Elizabeth M. Howe, 14 Concord Avenue, Cambridge, Massachusetts. Bound unpublished (1933) manuscript. 176 pages. [text]The history is based on replies to a questionnaire sent to the 24 surviving individuals of the 39 members of this class. For each of the 15 graduates who was not living, information was sought from their near-kin. Consequently a few of the replies were not self-written, but were supplied by sisters, husbands and grandchildren, and some one or two from alumnae records and other sources. The study found that the 39 graduates of the class of 1882 represented twelve states, from California to Massachusetts, the then Territory of Washington, the District of Columbia, and Japan. For six there are no records of ancestry; two families arrived late in America, and one graduate was a foreigner. The remaining thirty trace back to colonial stock. Of the thirty-three about whom there are ancestry data, fourteen were pure English, with various infusions of Dutch, Welsh, Irish, Swiss, and French blood. Two were pure Scotch; one Scotch-Irish; one, who led the class, was pure English with the exception of one great grandfather who was a Spanish Jew; and one was Japanese. Five, and possibly six, had ancestors who arrived on the "Mayflower." Another had ancestors on the "Anne," the ship following the "Mayflower." One antecedent immigrant dates back to 1621, one to 1622, and five others, one of whom was member of Lord Baltimore's colonists, to 1630-36. Ancestors of eight others arrived before the 18th century. Of the remaining seventeen members of the class, the ancestors of two arrived in the 19th century, of the remaining fourteen at various times in the 18th century, and one was Japanese. As noted above, 24 graduates, or 61 1/2 per cent, survived to witness the semi- [end]
Copyright 1999-2004: Cold Spring Harbor Laboratory; American Philosophical Society; Truman State University; Rockefeller Archive Center/Rockefeller University; University of Albany, State University of New York; National Park Service, Statue of Liberty National Monument; University College, London; International Center of Photography; Archiv zur Geschichte der Max-Planck-Gesellschaft, Berlin-Dahlem; and Special Collections, University of Tennessee, Knoxville.
The images and text in this Archive are solely for educational and scholarly uses. The materials may be used in digital or print form in reports, research, and other projects that are not offered for sale. Materials in this archive may not be used in digital or print form by organizations or commercial concerns, except with express permission.