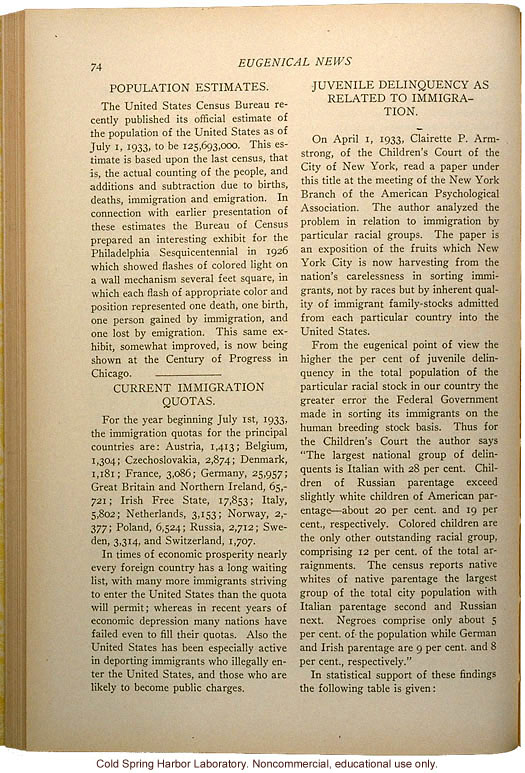 74 Eugenical News Population Estimates. The United States Census Bureau recently published its official estimate of the population of the United States as of July 1, 1933, to be 125,693,000. This estimate is based upon the last census, that is, the actual counting of the people, and additions and subtraction due to births, deaths, immigration and emigration. In connection with earlier presentation of these estimates the Bureau of Census prepared an interesting exhibit for the Philadelphia Sesquicentennial in 1926 which showed flashes of colored light on a wall mechanism several feet square, in which each flash of appropriate color and position represented one death, one birth, one person gained by immigration, and one lost by emigration. This same exhibit, somewhat improved, is now being shown at the Century of Progress in Chicago. [centered score] Current Immigration Quotas. For the year beginning July 1st, 1933, the immigration quotas for the principal countries are: Austria, 1,413; Belgium, 1,304; Czechoslovakia, 2,874; Denmark, 1,181; France, 3,086; Germany, 25,957; Great Britain and Northern Ireland, 65,721; Irish Free State, 17,853; Italy, 5,802; Netherlands, 3,153; Norway, 2,377; Poland, 6,524; Russia, 2,712; Sweden, 3,314, and Switzerland, 1,707. In times of economic prosperity nearly every foreign country has a long waiting list, with many more immigrants striving to enter the United States than the quota will permit; whereas in recent years of economic depression many nations have failed even to fill their quotas. Also the United States has been especially active in deporting immigrants who illegally enter the United States, and those who are likely to become public charges. Juvenile Delinquency as Related to Immigration. On April 1, 1933, Clairette P. Armstrong, of the Children's Court of the City of New York, read a paper under this title at the meeting of the New York Branch of the American Psychological Association. The author analyzed the problem in relation to immigration by particular racial groups. The paper is an exposition of the fruits which New York City is now harvesting from the nation's carelessness in sorting immigrants, not by races but by inherent quality of immigrant family-stocks admitted from each particular country into the United States. From the eugenical point of view the higher the per cent of juvenile delinquency in the total population of the particular race stock in our country the greater the error the Federal Government made in sorting its immigrants on the human breeding stock basis. Thus for the Children's Court the author says "The largest national group of delinquents is Italian with 28 per cent. Children of Russian parentage exceed slightly white children of American parentage - about 20 per cent. and 19 per cent., respectively. Colored children are the only other outstanding racial group, comprising 12 per cent. of the total arraignments. The census reports native whites of native parentage the largest group of the total city population with Italian parentage second and Russian next. Negroes comprise only about 5 per cent. of the population while German and Irish parentage are 9 per cent. and 8 per cent., respectively. In statistical support of these findings the following table is given: [end]
Copyright 1999-2004: Cold Spring Harbor Laboratory; American Philosophical Society; Truman State University; Rockefeller Archive Center/Rockefeller University; University of Albany, State University of New York; National Park Service, Statue of Liberty National Monument; University College, London; International Center of Photography; Archiv zur Geschichte der Max-Planck-Gesellschaft, Berlin-Dahlem; and Special Collections, University of Tennessee, Knoxville.
The images and text in this Archive are solely for educational and scholarly uses. The materials may be used in digital or print form in reports, research, and other projects that are not offered for sale. Materials in this archive may not be used in digital or print form by organizations or commercial concerns, except with express permission.