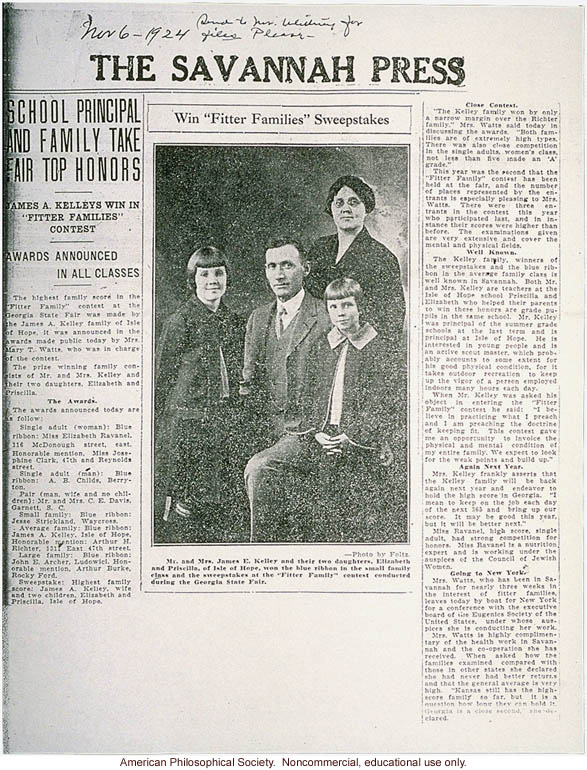 The Savannah Press School Principal and Family Take Fair Top Honors James A. Kelleys Win In "Fitter Families" Contest Awards Announced In All Classes The highest family score in the "Fitter Family" contest at the Georgia State Fair was made by the James A. Kelley family of Isle of Hope. It was announced in the awards made public today by Mrs. Mary T. Watts, who was in charge of the contest. The prize-winning family consists of the Mr. and Mrs. Kelley and their two daughters, Elizabeth and Priscilla. The Awards. The awards announced today are as follow: Single adult (woman): Blue ribbon: Miss Elizabeth Ravanel. 116 McDonough street, east. Honorable mention. Miss Josephine Clark, 47th and Reynolds street. Single adult (men): Blue ribbon: A. R. Childs, Derryton. Pair (man, wife, and no children): Mr. And Mrs. C. E. Davis, Garnett, S.C. Small family: Blue ribbon: James Strickland, Waycross. Average family: Blue ribbon: James A. Kelley, Isle of Hope, Honorable mention: Arthur H. Richter, 1311 East 47th street. Large family: Blue ribbon: John P. Archer, Ludowici. Honorable mention. Arthur Burke, Rocky Ford. Sweepstake: Highest family score: James A. Kelley, wife and two children, Elizabeth and Priscilla, Isle of Hope. Close Contest. "The Kelley family won by only a narrow margin over the Richter family." Mrs. Watts said today in discussing the awards. "Both families are of extremely high types. There was the close competition in the single adults, women's class, not less than five made an 'A' grade." This year was the second that the "Fitter Family" has been held at the fair, and the number of places represented by the entrants is especially pleasing to Mrs. Watts. There were three entrants in the contest this year who participated last, and in instance their scores were higher than before. The examinations given are very extensive and cover the mental and physical fields. Well Known. The Kelley family, winners of the sweepstakes and the blue ribbon in the average family class is well known in Savannah. Both Mr. And Mrs. Kelley are teachers at the Isle of Hope school. Priscilla and Elizabeth who helped their parents to win these honors are grade pupils in the same school. Mr. Kelley was principal of the summer grade schools at the last term and is principal at Isle of Hope. He is interested in young people and is an active scout master, which probably accounts to some extent for his good physical condition, for it takes outdoor recreation to keep up the vigor of a person employed indoors many hours each day. When Mr. Kelley was asked his object in entering the "Fitter Family" contest he said: "I believe in practicing what I preach and I am preaching the doctrine of keeping fit. This contest gave me an opportunity to invoice the physical and mental condition of my entire family. We expect to look for the weak points and build up." Again Next Year. Mrs. Kelley frankly asserts that the Kelley family will be back again next year and endeavor to hold the high scores in Georgia. "I mean to keep on the job each day of the next 365 and bring up our score. It may be good this year, but it will be better next." Miss Ravanel, high score, single adult, had strong competition for honors. Miss Ravanel is a nutrition expert and is working under the auspices of the Council of Jewish Women. Going to New York. Mrs. Watts, who has been in Savannah for nearly three weeks in the interest of Fitter Families, leaves today by boat for New York for a conference with the executive board of the Eugenics Society of the United States, under whose auspices she is conducting her work. Mrs. Watts is highly complimentary of the health work in Savannah and the co-operation she has received, compared with those in other states she declared she had never had better returns and that the general average is very high. "Kansas still has the high-score family so far, but it is a question how long they can hold it. Georgia is a close second." she declared. [photo] [caption] Win "Fitter Families" Sweepstakes Mr. And Mrs. James A. Kelley and their two daughters, Elizabeth and Priscilla, of Isle of Hope, won the blue ribbon in the small family class and the sweepstakes at the "Fitter Family" contest conducted during the Georgia State Fair.
Copyright 1999-2004: Cold Spring Harbor Laboratory; American Philosophical Society; Truman State University; Rockefeller Archive Center/Rockefeller University; University of Albany, State University of New York; National Park Service, Statue of Liberty National Monument; University College, London; International Center of Photography; Archiv zur Geschichte der Max-Planck-Gesellschaft, Berlin-Dahlem; and Special Collections, University of Tennessee, Knoxville.
The images and text in this Archive are solely for educational and scholarly uses. The materials may be used in digital or print form in reports, research, and other projects that are not offered for sale. Materials in this archive may not be used in digital or print form by organizations or commercial concerns, except with express permission.