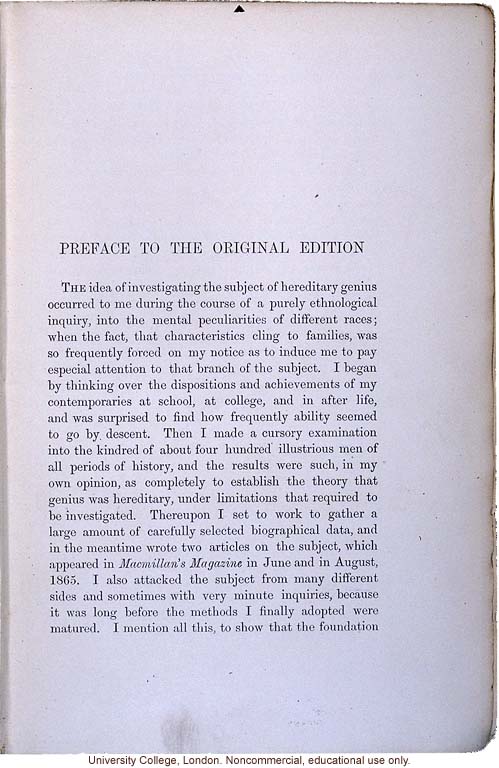 Preface to the Original Edition The idea of investigating the subject of hereditary genius occurred to me during the course of a purely ethnological inquiry, into the mental peculiarities of different races; when the fact, that characteristics cling to families, was so frequently forced in my notice as to induce me to pay especial attention to that branch of the subject. I began by thinking over the dispositions and achievements of my contemporaries at school, at college, and in after life, and was surprised to find how frequently ability seemed to go by descent. Then I made a cursory examination into the kindred of about four hundred illustrious men of all periods of history, and the results were such, in my own opinion, as completely to establish the theory that genius was hereditary, under limitations that required to be investigated. Thereupon I set to work to gather a large amount of carefully selected biographical data, and in the meantime wrote two articles on the subject, which appeared in [italics]Macmillan's Magazine[end italics] in June and in August, 1865. I also attacked the subject from many different sides and sometimes with very minute inquiries, because it was long before the methods I finally adopted were matured. I mention all this, to show that the foundation [end]
Copyright 1999-2004: Cold Spring Harbor Laboratory; American Philosophical Society; Truman State University; Rockefeller Archive Center/Rockefeller University; University of Albany, State University of New York; National Park Service, Statue of Liberty National Monument; University College, London; International Center of Photography; Archiv zur Geschichte der Max-Planck-Gesellschaft, Berlin-Dahlem; and Special Collections, University of Tennessee, Knoxville.
The images and text in this Archive are solely for educational and scholarly uses. The materials may be used in digital or print form in reports, research, and other projects that are not offered for sale. Materials in this archive may not be used in digital or print form by organizations or commercial concerns, except with express permission.