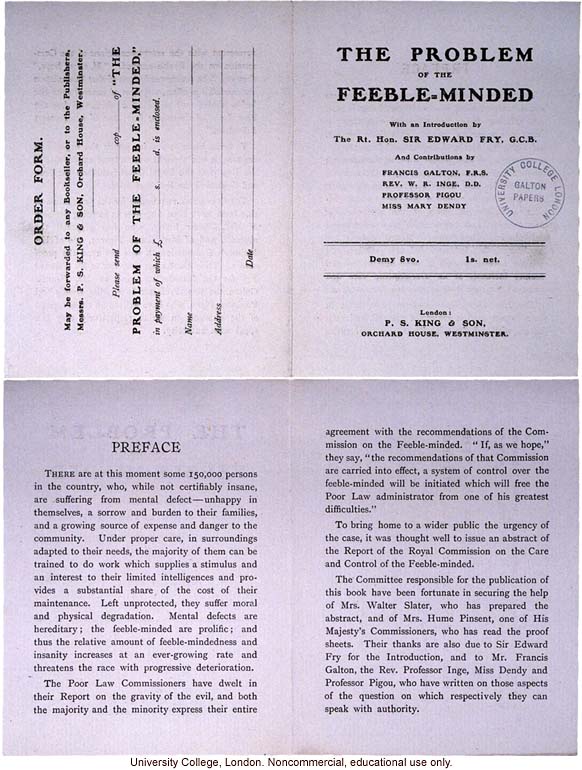 [set broadside]ORDER FORM. [centered score]May be forwarded to any Bookseller, or to the Publishers, Messrs. P. S. King & Son, Orchard House, Westminster. [centered score] [italics]Please send [underscore] cop [underscore] of[end italics]"The Problem of the Feeble-minded." [italics]in payment of which [British pound symbol][underscore] s.[underscore]d. is enclosed. Name [underscore] Address [underscore] Date [underscore][resume setting regular text] The Problem of the Feeble-Minded With an Introduction by The Rt. Hon. Sir Edward Fry, G.C.B. And Contributions by Francis Galton, F.R.S. Rev. W. R. Inge, D.D. Professor Pigou Miss Mary Dendy [double page width score] Demy 8vo. 1s. net. [double page width score] London: P. S. King & Son, Orchard House, Westminster. [lower portion] Preface There are at this moment some 150,000 persons in the country, who, while not certifiably insane, are suffering from mental defect--unhappy in themselves, a sorrow and burden to their families, and a growing source of expense and danger to the community. Under proper care, in surroundings adapted to their needs, the majority of them can be trained to do work which supplies a stimulus and an interest to their limited intelligences and provides a substantial share of the cost of their maintenance. Left unprotected, they suffer moral and physical degradation. Mental defects are hereditary; the feeble-minded are prolific; and thus the relative amount of feeble-mindedness and insanity increases at an ever-growing rate and threatens the race with progressive deterioration. The Poor Law Commissioners have dwelt in their Report of the gravity of the evil, and both the majority and the minority express their entire agreement with the recommendations of the Commission of the Feeble-minded. "If, as we hope," they say "the recommendations of that Commission are carried into effect, a system of control over the feeble-minded will be initiated which will free the Poor Law administrator from one of his greatest difficulties." To bring home to a wider public the urgency of the case, it was thought well to issue an abstract of the Report of the Royal Commission on the Care and Control of the Feeble-minded. The Committee responsible for the publication of this book have been fortunate in securing the help of Mrs. Walter Slater, who has prepared the abstract, and of Mrs. Hume Pinsent, one of His Majesty's Commissioners, who has read the proof sheets. Their thanks are also due to Sir Edward Fry for the Introduction, and to Mr. Francis Galton, the Rev. Professor Inge, Miss Dendy and Professor Pigou, who have written on those aspects of the question on which respectively they can speak with authority. [end]
Copyright 1999-2004: Cold Spring Harbor Laboratory; American Philosophical Society; Truman State University; Rockefeller Archive Center/Rockefeller University; University of Albany, State University of New York; National Park Service, Statue of Liberty National Monument; University College, London; International Center of Photography; Archiv zur Geschichte der Max-Planck-Gesellschaft, Berlin-Dahlem; and Special Collections, University of Tennessee, Knoxville.
The images and text in this Archive are solely for educational and scholarly uses. The materials may be used in digital or print form in reports, research, and other projects that are not offered for sale. Materials in this archive may not be used in digital or print form by organizations or commercial concerns, except with express permission.