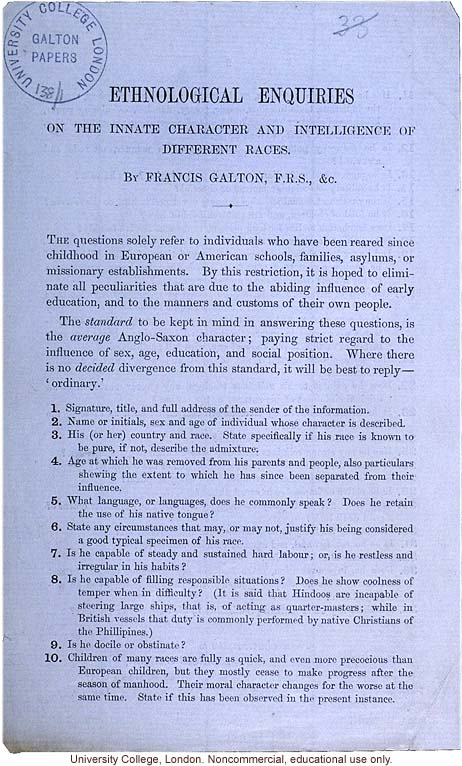 [stamped]University College London Galton Papers 138/1][end stamp] Ethnological Enquiries On the Innate Character and Intelligence of Different Races. By Francis Galton, F.R.S., &c. [centered graphic] The questions solely refer to individuals who have been reared since childhood in European or American schools, families, asylums, or missionary establishments. By this restriction, it is hoped to eliminate all peculiarities that are due to the abiding influence of early education, and to the manners and customs of their own people. The [italics]standard[end italics] to be kept in mind in answering these questions, is the [italics]average[end italics] Anglo-Saxon character; paying strict regard to the influence of sex, age, education, and social position. Where there is no [italics]decided[end italics] divergence from this standard, it will be best to reply-'ordinary.' 1. Signature, title and full address of the sender of the information. 2. Name or initials, sex and age of individual whose character is described. 3. His (or her) country and race. State specifically if his race is known to be pure, if not, describe the admixture. 4. Age at which he was removed from his parents and people, also particulars shewing the extent to which he has since been separated from their influence. 5. What language, or languages does he commonly speak? Does he retain the use of his native tongue? 6. State any circumstances that may, or may not, justify his being considered a good typical specimen of his race. 7. Is he capable of steady and sustained hard labour; or, is he restless and irregular in his habits? 8. Is he capable of filling responsible situations? Does he show coolness of temper when in difficulty? (It is said that Hindoos are incapable of steering large ships, that is, of acting as quarter-masters; while in British vessels that duty is commonly performed by native Christians of the Phillipines.) 9. Is he docile or obstinate? 10. Children of many races are fully as quick, and even more precocious than European children, but they mostly cease to make progress after the season of manhood. Their moral character changes for the worse at the same time. State if this has been observed in the present instance. [end]
Copyright 1999-2004: Cold Spring Harbor Laboratory; American Philosophical Society; Truman State University; Rockefeller Archive Center/Rockefeller University; University of Albany, State University of New York; National Park Service, Statue of Liberty National Monument; University College, London; International Center of Photography; Archiv zur Geschichte der Max-Planck-Gesellschaft, Berlin-Dahlem; and Special Collections, University of Tennessee, Knoxville.
The images and text in this Archive are solely for educational and scholarly uses. The materials may be used in digital or print form in reports, research, and other projects that are not offered for sale. Materials in this archive may not be used in digital or print form by organizations or commercial concerns, except with express permission.