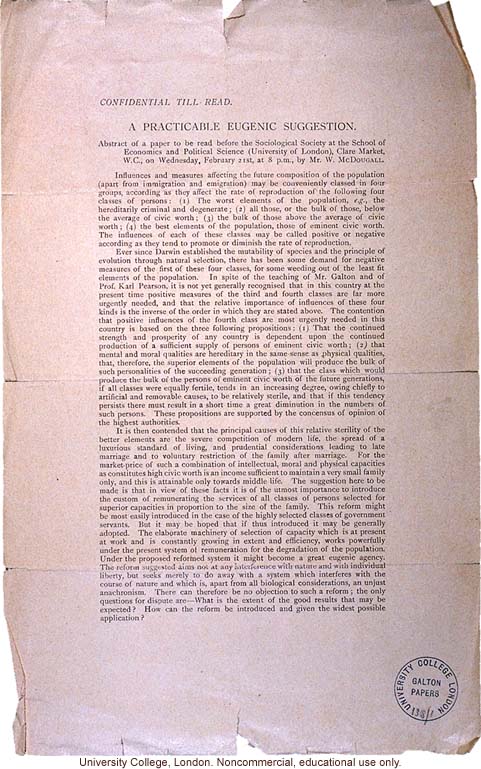 Confidential Till Read. A Practicable Eugenic Suggestion. Abstract of a paper to be read before the Sociological Society at the School of Economics and Political Science (University of London), Clare Market, W.C., on Wednesday, February 21st, at 8 p.m., by Mr. W. McDougall. Influences and measures affecting the future composition of the population (apart from immigration and emigration) may be conveniently classed in four groups, according as they affect the rate of reproduction of the following four classes of persons: (1) The worst elements of the population, [italics]e.g.[end italics], the hereditarily criminal and degenerate; (2) all those, or the bulk of those, below the average of civic worth; (3) the bulk of those above the average of civic worth; (4) the best elements of the population, those of eminent civic worth. The influences of each of these classes may be called positive or negative according as they tend to promote or diminish the rate of reproduction. Ever since Darwin established the mutability of species and the principle of evolution through natural selection, there has been some demand for negative measures of the first of these four classes, for some weeding out of the least fit elements of the population. In spite of the teaching of Mr. Galton and of Prof. Karl Pearson, it is not yet generally recognised that in this country at the present time positive measures of the third and fourth classes are far more urgently needed, and that the relative importance of influences of these four kinds is the inverse of the order in which they are stated above. The contention that positive influences of the fourth class are most urgently needed in this country is based on the three following propositions: (1) That the continued strength and prosperity of any country is dependent upon the continued production of a sufficient supply of persons of eminent civic worth; (2) that mental and moral qualities are hereditary in the same sense as physical qualities, that, therefore, that superior elements of the population will produce the bulk of such personalities of the succeeding generation; (3) that the class which would produce the bulk of the persons of eminent civic worth of the future generations, if all classes were equally fertile, tends in an increasing degree, owing chiefly to artificial and removable causes, to be relatively sterile, and that if this tendency persists there must result in a short time a great diminution in the numbers of such persons. These propositions are supported by the concensus of opinion of the highest authorities. It is then contended that the principal causes of this relative sterility of the better elements are the severe competition of modern life, the spread of a luxurious standard of living, and prudential considerations leading to late marriage and to voluntary restriction of the family after marriage. For the market-price of such a combination of intellectual, moral and physical capacities as constitutes high civic worth is an income sufficient to maintain a very small family only and this is attainable only towards middle life. The suggestion here to be made is that in view of these facts it is of the utmost importance to introduce the custom of remunerating the services of all classes of persons selected for superior capacities in proportion to the size of the family. This reform might be most easily introduced in the case of the highly selected classes of government servants. But it may be hoped that if thus introduced it may be generally adopted. The elaborate machinery of selection of capacity which is at present at work and is constantly growing in extent and efficiency, works powerfully under the present system of remuneration for the degradation of the population. Under the proposed reformed system it might become a great eugenic agency. The reform suggested aims not at any interference with nature and with an individual liberty, but seeks merely to do away with a system which interferes with the course of nature and which is, apart from all biological considerations, an unjust anachronism. There can therefore be no objection to such a reform; the only questions for dispute are--What is the extent of the good results that may be expected? How can the reform be introduced and given the widest possible application? [stamped]University College London Galton Papers 138/1[end stamp] [end]
Copyright 1999-2004: Cold Spring Harbor Laboratory; American Philosophical Society; Truman State University; Rockefeller Archive Center/Rockefeller University; University of Albany, State University of New York; National Park Service, Statue of Liberty National Monument; University College, London; International Center of Photography; Archiv zur Geschichte der Max-Planck-Gesellschaft, Berlin-Dahlem; and Special Collections, University of Tennessee, Knoxville.
The images and text in this Archive are solely for educational and scholarly uses. The materials may be used in digital or print form in reports, research, and other projects that are not offered for sale. Materials in this archive may not be used in digital or print form by organizations or commercial concerns, except with express permission.