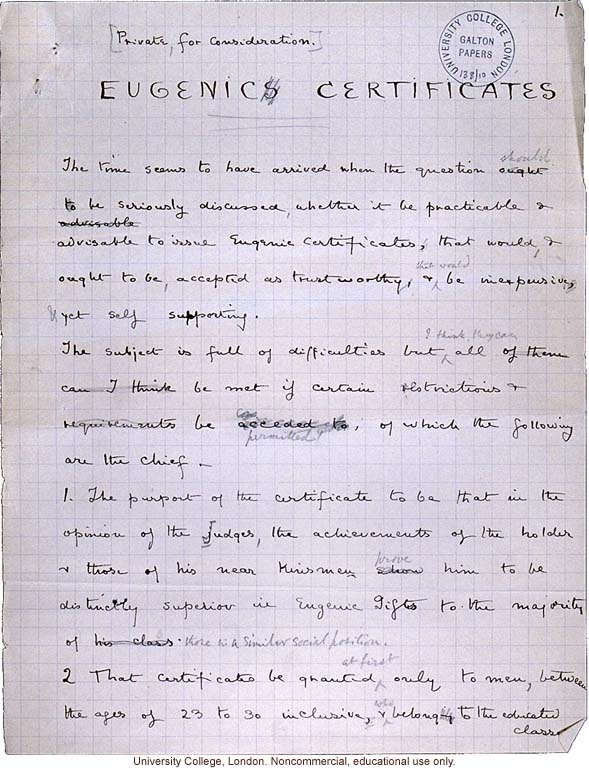 1- [stamped]University College London Galton Papers 138/10[end stamp] [opening square bracket]Private, for consideration.[closing square bracket] Eugenic[crossed out 's'] Certificates The time seems to have arrived when the question should be seriously discussed, whether it be practicable & advisable to issue Eugenic Certificates, that would, & ought to be, accepted as trustworthy, & that would be inexpensive, yet self-supporting. The subject is full of difficulties but I think they can all [crossed out]of them can I think[end crossed out text] be met if certain restrictions & [crossed out text]requirements[end crossed out text] be permitted [crossed out text]acceded to[end crossed out text], of which the following are the chief - 1. The purport of the certificate to be that in the opinion of the Judges, the achievements of the holder & those of his near kinsmen prove [crossed out]show[end crossed out] him to be distinctly superior in Eugenic Gifts to the majority of [crossed out]his class[end crossed out] those in a similar social position. 2. That certificates be granted at first only to men, between the ages of 23 to 30 inclusive, & who belong[crossed out]ing[end crossed out] to the educated class[obs writing] [end]
Copyright 1999-2004: Cold Spring Harbor Laboratory; American Philosophical Society; Truman State University; Rockefeller Archive Center/Rockefeller University; University of Albany, State University of New York; National Park Service, Statue of Liberty National Monument; University College, London; International Center of Photography; Archiv zur Geschichte der Max-Planck-Gesellschaft, Berlin-Dahlem; and Special Collections, University of Tennessee, Knoxville.
The images and text in this Archive are solely for educational and scholarly uses. The materials may be used in digital or print form in reports, research, and other projects that are not offered for sale. Materials in this archive may not be used in digital or print form by organizations or commercial concerns, except with express permission.