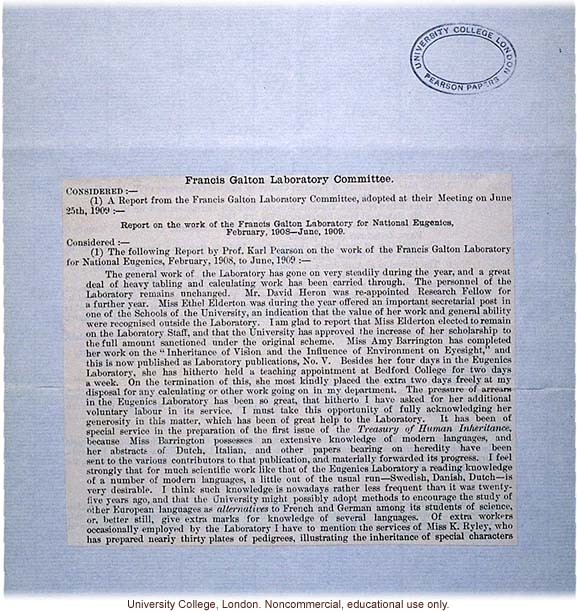 [stamped]University College London Pearson Papers[end stamp] Francis Galton Laboratory Committee. Considered:-- (1) A Report from the Francis Galton Laboratory Committee, adopted at their Meeting on June 25th, 1909:- Report on the work of the Francis Galton Laboratory for National Eugenics, February, 1908-June, 1909. Considered:-- (1) The following Report by Prof. Karl Pearson on the work of the Francis Galton Laboratory for National Eugenics, February, 1908, to June, 1909:-- The general work of the Laboratory has gone on very steadily during the year, and a great deal of heavy tabling and calculating work has been carried through. The personnel of the Laboratory remains unchanged. Mr. David Heron was re-appointed Research Fellow for a further year. Miss Ethel Elderton was during the year offered an important secretarial post in one of the Schools of the University, an indication that the value of her work and general ability were recognised outside the Laboratory. I am glad to report that Miss Elderton elected to remain on the Laboratory Staff, and that the University has approved the increase of her scholarship to the full amount sanctioned under the original scheme. Miss Amy Barringon has completed her work on the "Inheritance of Vision and the Influence of Environment on Eyesight," and this is now published as Laboratory publications, No. V. Besides her four days in the Eugenics Laboratory, she has hitherto held a teaching appointment at Bedford College for two days a week. On the termination of this, she most kindly placed the extra two days freely at my disposal for any calculating or other work going on in my department. The pressure of arrears in the Eugenics Laboratory has been so great, that hitherto I have asked for her additional voluntary labour in its service. I must take this opportunity to fully acknowledging her generosity in this matter, which has been of great help to the Laboratory. It has been of special service in the preparation of the first issue of the [italics]Treasury of Human Inheritance[end italics], because Miss Barrington possesses an extensive knowledge of modern languages, and her abstracts of Dutch, Italian, and other papers bearing on heredity have been sent to the various contributors to that publication, and materially forwarded its progress. I feel strongly that for much scientific work like that of the Eugenics Laboratory a reading knowledge of a number of modern languages, a little out of the usual run--Swedish, Danish, Dutch -- is very desirable. I think such knowledge is nowadays rather less frequent than it was twenty-five years ago, and that the University might possible adopt methods to encourage the study of other European languages as [italics]alternatives[end italics] to French and German among its students of science, or, better still, give extra marks for knowledge of several languages. Of extra workers occasionally employed by the Laboratory I have to mention the services of Miss K. Ryley, who has prepared nearly thirty plates of pedigrees, illustrating the inheritance of special characters [end]
Copyright 1999-2004: Cold Spring Harbor Laboratory; American Philosophical Society; Truman State University; Rockefeller Archive Center/Rockefeller University; University of Albany, State University of New York; National Park Service, Statue of Liberty National Monument; University College, London; International Center of Photography; Archiv zur Geschichte der Max-Planck-Gesellschaft, Berlin-Dahlem; and Special Collections, University of Tennessee, Knoxville.
The images and text in this Archive are solely for educational and scholarly uses. The materials may be used in digital or print form in reports, research, and other projects that are not offered for sale. Materials in this archive may not be used in digital or print form by organizations or commercial concerns, except with express permission.