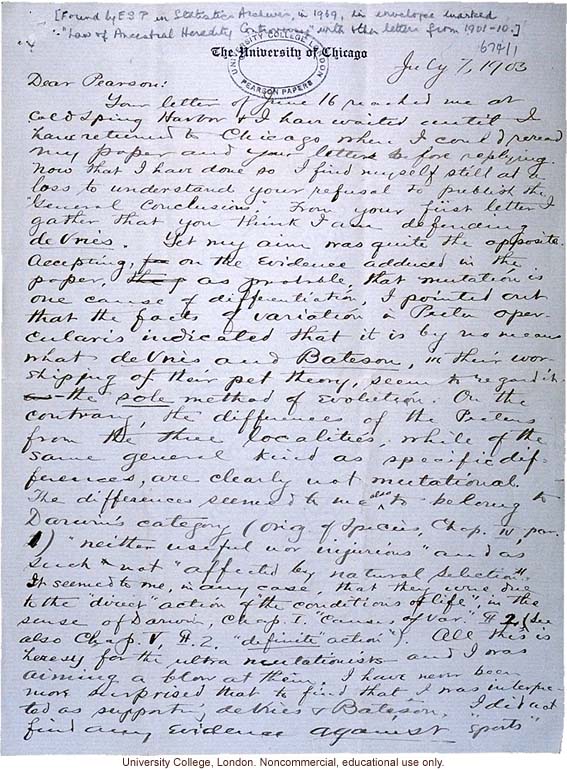 [marginalia note][Found by E.S.? in Statistics Archives, in 1969, in envelope marked "Law of Ancestral Heredity Controversy" with this letter from 1901-10.] 67411[end marginalia note] [stamped]University College London Pearson Papers[end stamp] The University of Chicago July 7, 1903 Dear Pearson: Your letter of June 16 reached me at Cold Spring Harbor & I waited until I have returned to Chicago where I could reread my paper and your letter before replying. Now that I have done so I find myself still at a loss to understand your refusal to publish the "General Conclusions." From you first letter I gather that you think I am defending [underscore]deVries[end underscore]. Yet my aim was quite the opposite. Accepting, on the evidence adduced in the paper, [crossed out text] as probable, that mutation is one cause of differentiation, I pointed out that the facts of variation in Pecter opercularis indicated that it is by no means what [underscore]deVries[end underscore] and [underscore]Bateson[end underscore], in their worshipping of their pet theory, seem to regard it -- the sole method of evolution. On the contrary, the differences of the Pretense from the three localities, while of the same general kind as specific differences, are clearly not mutational. The differences seemed to me also to belong to Darwin's category (Orig. of Species, Chap. IV, par. 1) "neither useful nor injurious" and as such "not affected by natural Selection." It seemed to me, in any case, that they were due to the "direct" action of "the conditions of life", in the sense of Darwin, Chap. I, "Causes of Var." [paragraph sign]2. (See also Chap V, [paragraph sign]. 2. "definite action"). All this is heresy for the ultra mutationists - and I was aiming a blow at them. I have never been more surprised that to find that I was interpreted as supporting deVries and Bateson. I did not find any evidence [underscore]against[end underscore] "spats"[?] [end]
Copyright 1999-2004: Cold Spring Harbor Laboratory; American Philosophical Society; Truman State University; Rockefeller Archive Center/Rockefeller University; University of Albany, State University of New York; National Park Service, Statue of Liberty National Monument; University College, London; International Center of Photography; Archiv zur Geschichte der Max-Planck-Gesellschaft, Berlin-Dahlem; and Special Collections, University of Tennessee, Knoxville.
The images and text in this Archive are solely for educational and scholarly uses. The materials may be used in digital or print form in reports, research, and other projects that are not offered for sale. Materials in this archive may not be used in digital or print form by organizations or commercial concerns, except with express permission.