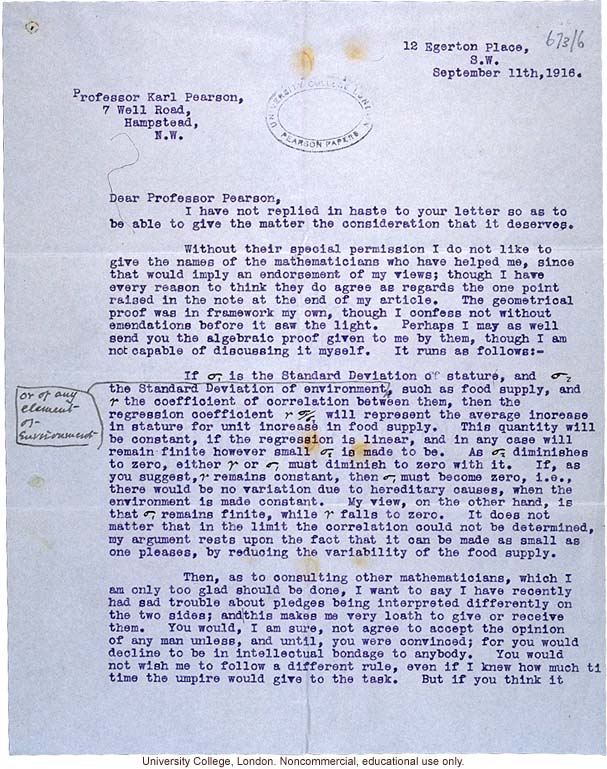 [marginalia]673/6[end marginalia] [stamped]University College London Pearson Papers[end stamp] 12 Egerton Place, S.W. September 11th, 1916. Professor Karl Pearson, 7 Well Road, Hampstead, N.W. Dear Professor Pearson, I have not replied in haste to your letter so as to be able to give the matter the consideration that it deserves. Without their special permission I do not like to give the names of the mathematicians who have helped me, since that would imply an endorsement of my views; though I have every reason to think they do agree as regards the one point raised in the note at the end of my article. The geometrical proof was in framework my own, though I confess not without emendations before it saw the light. Perhaps I may as well send you the algebraic proof given to me by them, though I am not capable of discussing it myself. It runs as follows:- If [greek l.c.sigma inferior '1'] is the Standard Deviation of stature, and [greek l.c. sigma, inferior '2'] the Standard Deviation of environment or of any element or environment, such as food supply, and [greek l.c.gamma] the coefficient of correlation between them, then the regression coefficient [greek l.c. gamma then l.c.sigma over l.c. sigma inferior '2'] will represent the average increase in stature for unit increase in food supply. This quantity will remain finite however small [greek l.c. sigma inferior '2'] is made to be. As [greek l.c. sigma inferior '2'] diminishes to zero, either [greek l.c. gamma] or [greek l.c. sigma inferior '1'] must diminish to zero with it. If, as you suggest, [greek l.c. gamma] remains constant, then [greek l.c. sigma inferior '1'] must become zero, i.e., there would be no variation due to hereditary causes, when the environment is made constant. My view, on the other hand, is that [greek l.c. sigma inferior '1'] remains finite, while [greek l.c. gamma] falls to zero. It does not matter that in the limit the correlation could not be determined, my argument rests upon the fact that it can be made as small as one pleases, by reducing the variability of the food supply. Then as to consulting other mathematicians, which I am only too glad should be done, I want to say I have recently had sad trouble about pledges being interpreted differently on the two sides; and this makes me very loath to give or receive them. You would, I am sure, not agree to accept the opinion of any man unless, and until, you were convinced; for you would decline to be in intellectual bondage to anybody. You would not wish me to follow a different rule, even if I knew how much time the umpire would give to the task. But if you think it [end]
Copyright 1999-2004: Cold Spring Harbor Laboratory; American Philosophical Society; Truman State University; Rockefeller Archive Center/Rockefeller University; University of Albany, State University of New York; National Park Service, Statue of Liberty National Monument; University College, London; International Center of Photography; Archiv zur Geschichte der Max-Planck-Gesellschaft, Berlin-Dahlem; and Special Collections, University of Tennessee, Knoxville.
The images and text in this Archive are solely for educational and scholarly uses. The materials may be used in digital or print form in reports, research, and other projects that are not offered for sale. Materials in this archive may not be used in digital or print form by organizations or commercial concerns, except with express permission.